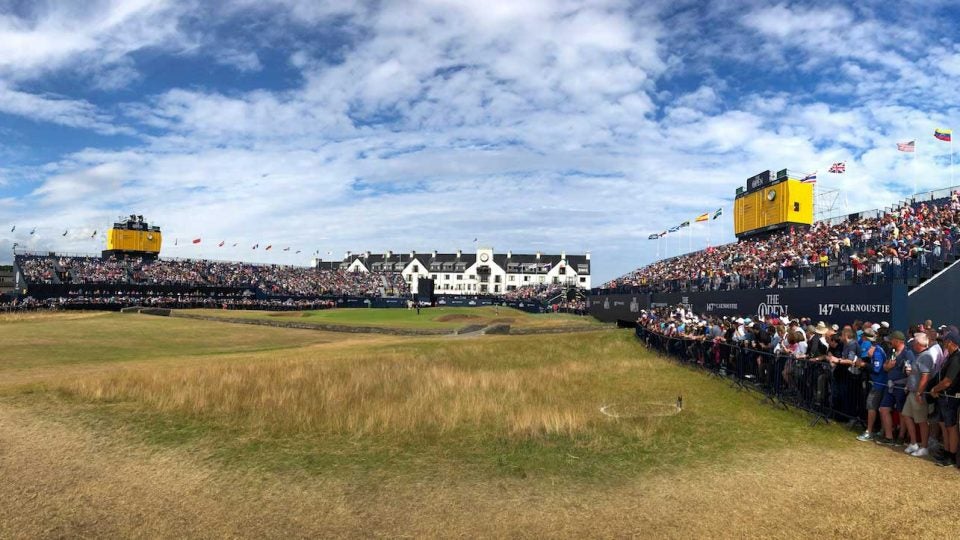 The 18th at Carnoustie during the 147th British Open.
Getty Images

On the seventh day, the wind blew. All week at the British Open, Carnoustie was much more nice than nasty. On Sunday, however, it bared its fangs, courtesy of breezes that gusted to 25 miles per hour. It turned Carnoustie from being merely respected to legitimately feared. Make no mistake, however, Carnoustie was great all week. Players and golf fans have long acknowledged Carnoustie as the toughest of all Open tracks and among the hardest courses in the world. Its gargantuan (for a links) length, at 7,400 yards, its reliably ferocious winds off the North Sea, its 112 big, deep bunkers and its ditches and streams typically send scores soaring. Its dense rough and brutal finish further complicate matters. Yet, we saw a different Carnoustie this week. It wasn’t quite benign, but it wasn’t a terror, either.

A record-breaking lack of rain in the weeks leading up to the Open left the course parched, brown and running as fast as players had ever experienced. Drivers ran out more than 90 yards at times. So yes, the course played much shorter than it would have in lush conditions, yet it still posed a compelling test, because the fiery fairways brought bunkers, rough and water into play that we wouldn’t have seen in wetter conditions. Even with calm winds, that left competitors having to think on every single shot, which makes for fascinating viewing.

On Friday’s second round, a rain squall dampened the fairways and greened them up in patches. Players now had to calculate new roll-out distances. It dried out again on Saturday and a third Carnoustie emerged. Players changed strategies, too, taking more risks, hitting more drivers off the tee, knowing that they had to make birdies, especially in anticipation of the winds to come on Sunday. As co-leader Zach Johnson correctly noted before the start of Round 3, “Carnoustie is difficult whether it’s green or brown.”

On Sunday, as forecast, the winds finally blew. It brought holes such as the par-5 6th, “Hogan’s Alley,” to life. Downwind all week, it was an easy birdie 4, the fairway bunkers not even a thought on the tee shot. In the final round, everything changed. The leaders faced 23-mph breezes against and across. The 1996 British Open champ, Tom Lehman, astutely observed, “Under these conditions, it takes a great drive just to put it in play. All the bunkers are in play. To hit it in the right rough is not a bad place to hit it.”

You don’t get clearly delineated, death-defying, risk/reward scenarios like you do at TPC Sawgrass. You didn’t have the birdie/eagle drama potential that defines the back nine at Augusta. You’re not trembling on touch shots and putts as you are at U.S. Open venues such as Shinnecock Hills. What you did have at Carnoustie was decision-making on every shot: on club selection, trajectory, landing spot and roll-out distance. Tee shots had to be positioned correctly for an advantageous angle on the approach. You had sensibly paced and contoured greens, running 10 or 10.5 on the Stimpmeter, meaning you could charge a putt or two, make a bunch and get on a run.

With greens at that speed, organizers could tuck pins behind bunkers and sand hills and demand choices from players on how close they dared to attack the hole. The myriad hazards punished mostly in proportion to the quality of the shot. Atrocious approaches vanished in gorse bushes or OB or in the Barry Burn. Less than perfect shots usually found the fescue, which was of ideal density for forcing vexing decisions — hack out and lay up, or flog it and go for the green. Dustin Johnson and Sergio Garcia on Thursday and Kevin Kisner on Friday were three examples where perhaps good golfers got greedy, and each paid dearly for his impudence.

Carnoustie is hardly charming, let alone handsome, but as a test of golf, it may be superior to all others on the British Open rota. As with a truly terrific tournament course, it yielded many low individual scores, yet the overall winning total was just eight under-par amid some of the easiest conditions imaginable. Perhaps best of all, it fits everybody’s game for championship golf, over-favoring neither the long hitter, straight hitter nor the short-game wizard. That’s the mark of greatness.

There was plenty of chatter in the pubs this week from expense account types who wouldn’t mind seeing the British Open never return to Carnoustie. There are no sea views from the course, they sniff. The town is plain, the lodging options limited, the social scene muted. None of that should matter. Carnoustie proved conclusively that it deserves its place on the Open rota. As a destination, Carnoustie earns a ‘B.’ As a tournament golf course, the way it was set up this week, Carnoustie earns an easy ‘A.’