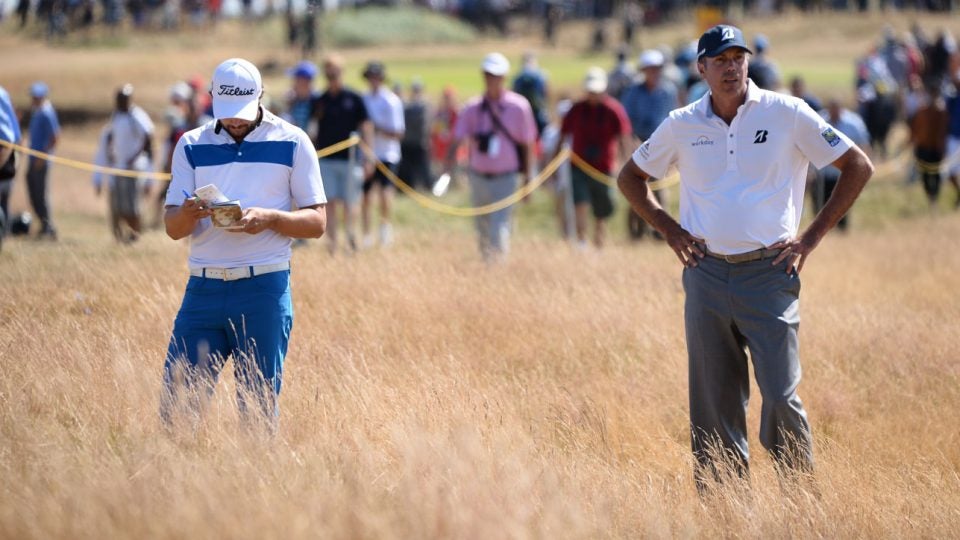 CARNOUSTIE, Scotland — In the Open Championship rota, Carnoustie has always been underappreciated. It has none of the charm of the Old Course, the beauty of Turnberry, or the majesty of Royal Birkdale. It’s widely considered a hard, joyless slog that rewards precise but inartistic golf. But a funny thing happened during the first round of the 147th Open: parched by months of searing heat and no rain, the ancient links was transformed into a rollicking good time, a brownish canvas that rewarded artistic expression and derring do.

How far was the ball rolling on the crispy turf?

Thomas Pieters drove the first hole (playing 396 yards), a handful of players drove over the back of the third (350) and Retief Goosen, who is 49 years old and has had a bevy of back surgeries, drove the 11th (382). Jordan Spieth hit a 300-yard 5-iron. On the par-3 16th hole, the pin position was 40 yards from the front edge; Marcus Kihult landed his tee shot 20 yards short of the green…and watched it skip and bounce and roll and trickle past the hole. Kevin Na, who averages 289.7 yards per drive this season, smashed a 330-yard 3-wood on the 15th hole. Was it fun to watch all that delicious roll-out?

The fairways were rolling significantly faster than the lush greens. At last month’s U.S. Open, the USGA let Shinnecock Hills’ greens get burnt-out and, on Saturday afternoon, more or less unputtable. Shrill criticism ensued, and the R&A was determined to not let history repeat itself. “The greens are very slow,” said Bernhard Langer. “I haven’t putted greens like these in 30 years on Tour.” He amended that to 20 years, and then maybe 10, but you get the point.

The R&A did offer a handful of tucked pins and others that Justin Rose described as “tricky” but most of the field appreciated the compassionately softened greens and heaped praise upon the setup, though Tyrrell Hatton said of the Royal & Ancient, “They were a bit scared. I don’t see why the greens had to be as slow as they were.”

But fast fairways, receptive greens and wispy, dry rough left most players in attack mode, with the likes of Jon Rahm hitting driver 11 times, on a course that has traditionally rewarded more conservative, point-A-to-point-B course management. “Obviously it offers more options than it normally does,” said Hatton. “Normally, it’s pretty regimented around here.”

Said Phil Mickelson,”There’s always two or three clubs [that can be used] on each tee.” Explained Na, “Every hole, do you hit short of the bunkers, squeeze your drive between the bunkers, or try overpowering and fly the bunkers?” The multitude of options could be torturous on the players. Said Spieth, “You hit a shot, and it doesn’t go as planned, and you’re always second-guessing yourself: should have hit it somewhere else.”

This calculus is made more difficult because layups are hardly risk-free. On the 352-yard par-4 third hole, Hatton tried to play short of the bunkers with a 7-iron off the tee but his ball rolled out 50 yards into the sand. Langer also tried to lay up short of the bunkers but his ball skirted around them and rolled 20 yards beyond. “It’s very, very tricky,” Langer said. “It’s so firm that you can’t calculate or control it.”

The turf itself offered a unique challenge. “There’s almost no grass out there,” said Na. “It’s really easy to hit it thin because you don’t get that cushion.” Added Pat Perez, “I can’t get my irons in the ground. [The ball] keeps coming off squirrelly.”

Even so, Perez was one of Carnoustie’s most ardent supporters on Thursday, though for entirely selfish reasons: “I think it’s fantastic how the setup is. I wish a lot more courses were like this. For once in a major, it doesn’t favor the long hitter.” Perez went on to explain that he was getting so much roll-out off the tee his ball was visiting places he could only previously dreamed of. But some the biggest hitters sought to preserve their advantage by smashing drivers as often as possible. The rough is so benign that Rahm offered a thought that can serve as summary of the modern game: “If you can hit driver, you don’t need to hit fairways.”

In the coming days, Carnoustie will continue to evolve. Rain is forecast for Friday, while Sunday is supposed to have the highest temperatures and wind speeds of the tournament. Trackman-optimized pros have become ever more precise but this quirky, unpredictable and suddenly fascinating golf course has brought out the fatalism in the field. “The ball is rolling so far you sometimes wonder if it will ever stop,” said Kihult. “I’m not even sure what makes it stop.” Added Fowler, ”All you can do is hit it how you’re trying to and what you’re envisioning — after that, it’s kind of out of your hands.”