Capt. Furyk’s picks were no surprise but there was still cause for giddiness at his announcement 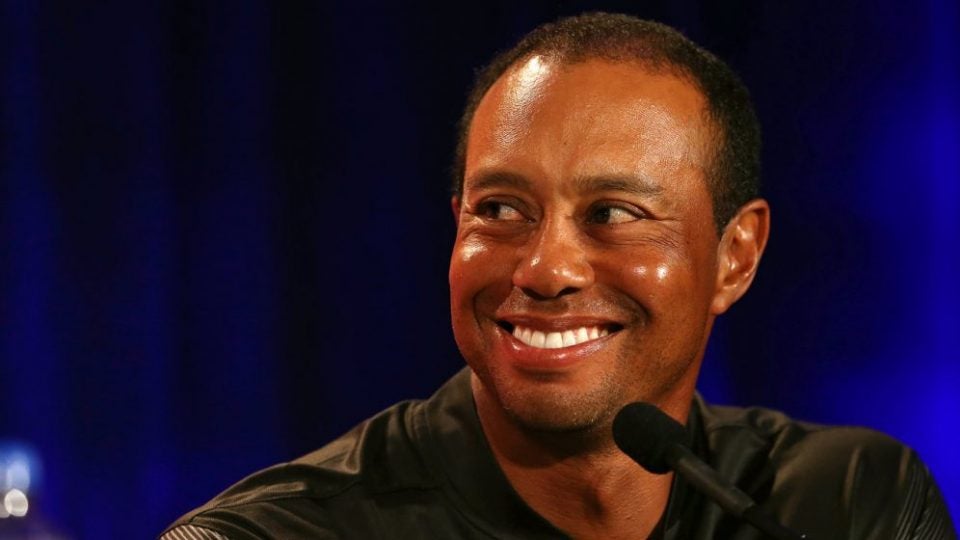 Tiger Woods was all smiles at the captain's pick announcement in Philadelphia on Tuesday.

WEST CONSHOCKEN, Pa. — Greater Philadelphia is rich in Marriotts and Tuesday’s 5 p.m. Ryder Cup press conference, organized by the PGA of America, was held here at one called Marriott West, right off I-76, a hotel that has not seen so much golf talent in one place since the U.S. Open was held at nearby Merion in 2013. Justin Rose stayed at this Marriott five years ago and went on to win that week.

On Tuesday afternoon, the hotel’s circular driveway was choking with shiny new BMWs, a nod to the title sponsor of FedEx III, the BMW Championship, held this week at the Aronimink Golf Club, an often-remodeled Donald Ross course that was the site of the 1962 PGA Championship. Jim Furyk, the U.S. captain this year, wasn’t wearing a hat for the press conference, which was interesting to see. At tournament press conferences, the players always wear their lids, in the name of sponsor exposure —unless they find themselves in the Press Building at Augusta National, where hats-on-heads are verboten.

Furyk’s two first announced captain’s picks — Bryson DeChambeau and Phil Mickelson — came on the dais in their customary hats, Dr. M wearing KPMG, Dr. D in Puma. But when Tiger sauntered on stage as the third pick, he was wearing running shoes, trim jeans — and no hat! He looked marvelous. Phil did, too. It’s amazing what a Sunday 63 can do for a guy. As for DeChambeau, he’s been king of world for a fortnight now. FedEx I, FedEx II, and now this.

It was a grand occasion, with two Ryder Cupper vice-captains watching the proceedings, Davis Love III and the newly-named David Duval. Tiger Woods, now a team member as a player, is no longer a vice captain. But Matt Kuchar is. You’re keeping track at home, right? Jordan Spieth was also in the house, mulling about, trying to make himself useful. All in all, it was a far different event from an equivalent one four years ago, when the U.S. captain, Tom Watson, named his captain’s picks from the stage where “Saturday Night Live” is shot. Live from New York, it’s . . . Webb Simpson!

People will say that there wasn’t much drama to the Tuesday proceedings. There was a theory that Furyk might name Dr. D., Dr. M. and Tony Finau on Tuesday, and then name Tiger Woods as the fourth and final captain’s pick on the Monday after the Aronimink tournament. This would have had the advantage of taking playing pressure off Finau this week and give Woods another night at home in Florida, between the Tour’s Boston and Philadelphia stops.

But Furyk didn’t go that way, and didn’t waste any time. “I’m going to cut to the chase,” Furyk said. “The three members of the team are Bryson DeChambeau, Phil Mickelson and Tiger Woods.” Finau has a big week ahead of him.

When Allen Iverson was in his Philadelphia 76ers prime, he had a lot of big nights at this hotel. He’d take rooms for himself and friends and family members and live large for days at a time. It was party time. The Tuesday Ryder Cup press conference had a similar feel, with an open bar for all at the end of the proceedings.

For reasons not immediately apparent — nothing to do with drink — Tiger and Phil had a giggle-fest when they stood almost shoulder-to-shoulder to do a joint standup for one of the broadcast outlets after the formal announcements were over. We’ll all be seeing a lot those two in Paris, although not, Furyk noted, twice a day on the Friday and Saturday of Ryder Cup play. Some of us will tune in to watch them go head-to-head on pay-per-view in Las Vegas, $9 million to the winner.

In any event, this is likely the best team Woods and Mickelson have ever been on together, with Spieth and Brooks Koepka and Dustin Johnson and maybe even Tony Finau. That prospect could have left them giddy. They’re in their 40s. They’re deep on the back nine of their careers.

The Ryder Cup, of course, is not about money, but about pride, about patriotism, about team. That’s why Furyk and Woods were not wearing hats. That’s why millions of sports fans in America and Europe, with only a passing interest in golf, will watch the Ryder Cup. The Ryder Cup is the closest thing golf has to football, the American or European version of the game.

“I love their songs, I love their chants,” Furyk said. That’s like an Ohio State fan saying he or she likes hearing “The Victors,” the University of Michigan fight song, in Ann Arbor. It’s not that you really like it. It’s that you like how it makes you feel. Rory McIlroy’s face looked actually possessed two years ago, after he drained a bomb against Patrick Reed at the 2016 Ryder Cup. That kind of thing.

Woods was named as a vice captain last year, long before his T-6 finish at this year’s British Open. After his runner-up finish at the PGA Championship, it seemed obvious that he would be one of the four captain’s picks.

A reporter asked Woods, “Could you be brutally honest with us and tell us how long you’ve known you were a pick?”

Woods started to respond in the first person, half-stammering, and then retreated into the third person. “Probably for —”

He paused. “I played well at the PGA, so we are hinting at — Another half-stop. “Sorry.” A reboot.

“The vice captains and the captain were hinting at picking him as a player,” Woods said. “So as a vice captain, I put my hat in for that player.” People laughed.

But that’s not why he was without a hat on Tuesday afternoon, in Salon C, of the Marriott West. He’s rich in hats. Ryder Cup W’s is another matter.