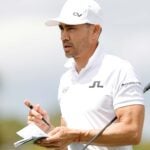 Camilo Villegas has a lot on the line Sunday at the Honda Classic.

PALM BEACH GARDENS, Fla. — Camilo Villegas won this tournament, the Honda Classic, on this golf course, PGA National, a short bike ride (for him) from his home in Jupiter. But that was 11 years ago. A long time ago.

“Man, I don’t know who that is, but that was some shot,” a fan said after Villegas smashed a 3-wood, line-drive second shot on the par-5 18th on Saturday. He was hitting it straight into the fan.

Villegas proceeded to glide down the fairway, looking like he didn’t have a care in the world. White shoes, white pants, white belt, white shirt, white hat—and the welterweight physique to pull it off. But looks, of course, can fool us all.

He was playing, here on Saturday, with his Tour status on the line. His round on Sunday will be more of the same, as he plays under a PGA Tour status called Major Medical Extension, owing to an injury to his right shoulder. Villegas needs to finish third or better here to maintain full playing privileges on Tour. If he doesn’t, he’s exempt on the Korn Ferry Tour.

Villegas has won four times on Tour. He’s the greatest golfer, by far, to come from Colombia. The 39-year-old golfer has made over $20 million just on the PGA Tour. He’s likely doubled those earnings, at least, with other income. That’s his work life.

And then there’s his life life. He’s playing with a pain that might diminish over time but will never disappear. Villegas and his wife, Maria Ochoa, lost their 22-month-old daughter, Mia, to cancer last July.

During the third-round telecast on NBC, there was a segment about Villegas and his wife donating a room at Nicklaus Children’s Hospital in Mia’s memory, a room where hospital staffers working in hematology and oncology can try to unwind from the unimaginable pressures of their jobs. The hospital, in Miami, is one of the charities associated with the Honda Classic. Supporting the hospital has been a driving force in the life of Barbara Nicklaus, Jack’s wife of more than 60 years.

Villegas shot 69 and 65 in the first two rounds, which earned him a late (1:15 p.m.) tee time with Stewart Cink in the third round. The PA announcer, identifying the players on the 18th green, had no problem at all with Cink’s name. His playing partner’s name came out something like this and right out of Greensboro: Cuh-MILL-oh Var-LAY-gus. Camillo has heard ‘em all. Ca-Me-oh Beh-jay-gus is close to correct, at least in American English.

Villegas got up and down from in front of the green for a closing birdie and a round of 72, two over par. He’ll start the last round in a tie for 13th, six shots out of first but only three shots out of second. Sunday will be big for him, in terms of his PGA Tour career. But it’s not life-or-death.

Cink missed a two-footer on the last for par. When he got over his ensuing tap-in, the wind moved it. He called in an official, to make sure he was playing it the right way. (He was; you don’t move it back if you never marked it, which he hadn’t.) A long ending to a long day, in the wind, on a hard course. But he and Villegas had a notably warm exchange when it was over.

“One of my favorite guys to play with,” Cink said later. Cink had one of his own children caddying for him, and through the round he wondered what Villegas must be going through. Villegas’ caddie was his brother, Manuel, also a professional golfer. “The golf course as a sanctuary,” Cink said. “As it is for many of us.”

As Villegas came off the 18th green and entered a makeshift tunnel underneath the bleachers, two old friends were waiting for him. Villegas burst into a big smile.

“Guy Kinnings and Clarkey Jones!” Villegas said. The two men were once prominent agents at IMG and represented Villegas for years. After the 2008 British Open, Jones was following Villegas through the clubhouse at Royal Birkdale following the golfer’s disappointing fourth-round 76. Jones was a notably dapper agent of the old school and Villegas was famously stylish. Villegas was practically speed-walking when he said to Jones, “And another thing — these pants are s—.” The things we think are important.

That was then. And now is now. His birdie on the last was brave, in golf terms. “I needed a 4 to go home,” Villegas said.

Regarding his unexpected reunion with his two former agents, Villegas said, “A lot of good memories.”

Good memories are a blessing.

“Just like old times,” Jones said to Villegas, behind 18.