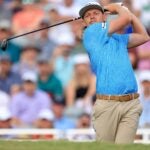 Cameron Smith shot 68 during his opening round at the PGA Championship.

TULSA, Okla. — Cameron Smith stood on Southern Hills’ 1st tee box and peered down the fairway. He was a bit stunned.

He’d hit the ball fine on his opening nine at the PGA Championship (he started on No. 10), but his scorecard was decorated with squares nonetheless. The Aussie was nine holes into the second major of 2022, and he’d made bogey or worse on a third of them — a double at the par-4 12th, and back-to-back bogeys at 16 and 17. But the bad still far outweighed the good. As he made the trek up the hill to the 1st tee, he was two-over par.

As he gathered his thoughts and took stock of the situation, Smith took a sip from his water bottle. He silently told himself two words.

That little phrase was all it took. From that point forward, Smith played like a whole new golfer.

“I knew I had a few birdies in me that back nine,” Smith said. “It all just came together.”

“A few” was selling himself a bit short. Two hours later when Smith walked off the course — drenched in sweat from the muggy Oklahoma air — his scorecard had five circles on the inward nine. Just like that, his PGA Championship was back on track.

The mental reset on the 1st tee box began Smith’s resurrection, but it was his birdie putt on the 1st green that really got his engines revving. When his pearly-white Titleist rattled into the bottom of the cup at the long par-4, Smith’s day took on a whole new tone.

“It was just nice to see a putt go in,” he said. “I think that really just got the head freed up a little bit and was able to play golf like I want to play that back nine.”

He was only getting started. Smith tacked on a birdie at the 2nd, and made it a turkey with another at the 3rd. With his score back in red numbers, he kept the hot streak going. Smith played the final six holes in one under, and singed his card for a tidy 68.

“It was definitely one of those rounds that could have got away from me quite quickly,” Smith admitted. “Another couple over on that back nine, I’m probably out of the golf tournament. So nice to rally.”

It was a Jekyll and Hyde type of day for Smith. Luckily, all he needed to summon Dr. Jekyll was a bit of self-talk.

“Just a little bit of a mental reset,” Smith said. “I knew I was hitting the ball well; just need to go out there and do it.”