Cameron Champ enters this week looking to defend his title at the Sanderson Farms Championship. Last year’s win marked the first of his young PGA Tour career, which marked a dream come true for Champ — but also inflated expectations for a player just two events into his rookie season.

On Tuesday, Champ reflected on a rookie year that began with a win but included injury, struggles and frustrations.

It was a picture-perfect start to the big-bombing Champ’s young career. After graduating from the Web.com Tour (now the Korn Ferry Tour) Champ finished T25 at the Safeway Open before winning at the Sanderson Farms just a week later. He finished T28 in Las Vegas, T10 in Mexico and 6th at Sea Island to wrap up a highly successful fall season. Of his final 16 rounds of the year, 15 were in the 60s. His star seemed risen.

“I obviously had an extremely hot start to the fall, just playing solid, really wasn’t worrying about much,” Champ recalled in Mississippi on Tuesday. Suddenly he was thrust into the spotlight of featured pairings and media scrums. “At first I didn’t feel like it affected me. But on the inside I think it did. I had expectations, kind of putting extra pressure, kind of worrying about things I wasn’t worrying about all last year,” he added.

As 2019 rolled around, things got more difficult. After a T11 at the Tournament of Champions to begin the year, Champ finished T73 at the Sony Open. The next week, he missed his first cut as a Tour member at Torrey Pines. He made the cut at both the Waste Management (T67) and the AT&T Pebble Beach Pro-Am (T28) but missed the cut at the Genesis Open. Frustration was beginning to mount.

“You know, I wish — knowing what I went through, I wish now I know kind of how I could have handled it better because over time it just builds up and builds up, and usually you don’t want to get too frustrated on the course. If I do, I just keep it inside until I’m done with the shot, but throughout the year it just kept blowing over and over, and I’d get mad over things I usually wouldn’t get mad over,” Champ said.

Then came injury. At the Arnold Palmer Invitational, Champ tweaked his back en route to an 81-70 missed cut. The following week, he tried to battle through at TPC Sawgrass (“I wasn’t going to back out of the Players,” he said) but had to WD after an opening 78.

He battled poor health and poor form over the months that followed. In his 10 subsequent starts, Champ made just three cuts, his best finish coming in a T46 at the Rocket Mortgage Classic. Over a 37-round streak, Champ broke 70 just three times. 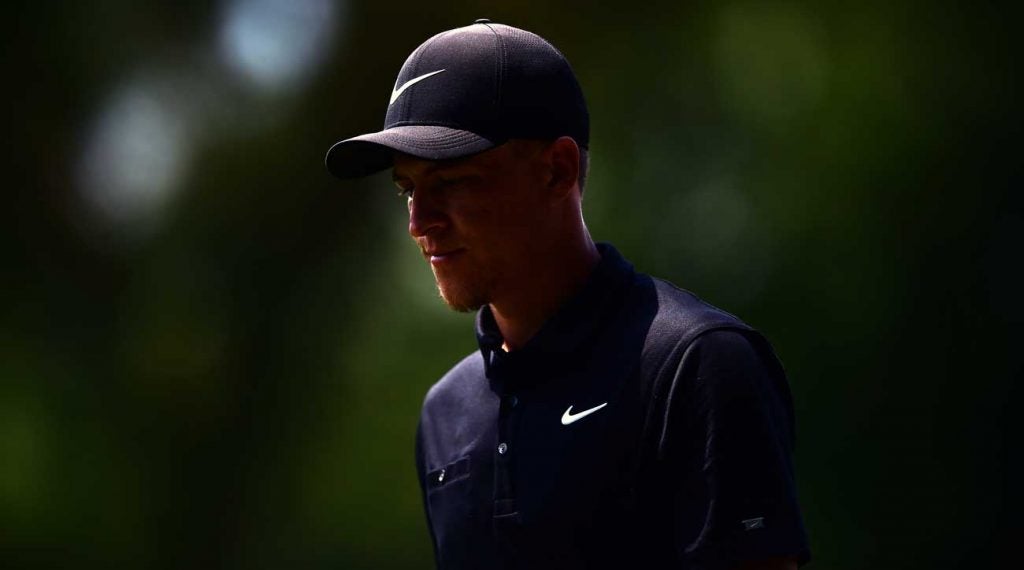 Cameron Champ had no lack of highs and lows in his rookie year on the PGA Tour.
Getty Images

Still, Champ’s fall was enough to qualify him for the postseason, where he posted his most impressive finish of the calendar year, firing 66-69 on the weekend at the Northern Trust for a T21 finish that locked up his spot in the BMW Championship. Despite a lackluster showing the following week, Champ took some solace in his form. He also said he’s glad to have faced the struggles.

“For me, I’m kind of happy it happened, happened now. It’s something I can — something I’ve really sat back and looked at, what I did for those two months, whether that’s practicing, how I showed up to the course, if I showed up on time, what I was eating, if it affected my mood. There’s a lot of things that go into it.”

Champ enters this week’s event after a rejuvenating couple weeks away from the game with perspective and what he called a “maturity factor.” He also revealed where he’s looked for inspiration: Dustin Johnson.

“I really look at a DJ factor — I always really keep an eye on his stats and everything he does. For his first few years on Tour to where he is now, he’s in a similar situation I’m in,” Champ said. Johnson has always been notably long off the tee, but it was when he dialed in his focus on his wedges that victories began to pile up and his ascent to World No. 1 followed.

Champ can relate: he led the PGA Tour in driving distance last season but finished outside the top 150 in strokes gained approach the green from every distance between 75 and 175 yards.

“[Johnson] is someone I really look up to in that aspect, as far as where he’s gotten his short game and wedges and obviously he rose to the top immediately,” Champ said. “If I just keep working at it, wedges and putter, that’s really all I’m really focused on.”

Champ’s rookie campaign is difficult to put a bow on. Highs and lows. Struggles and learnings. Three top 10s. Ten missed cuts. But in all, the Texas A&M grad is happy with what he’s learned and where it leaves him.