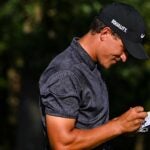 Cameron Champ is one of just a few Black golfers with status on the PGA Tour.

Cameron Champ is making a statement this week at the BMW Championship.

Champ is wearing a one-black, one-white pair of shoes, with Black Lives Matter written on the midsole, as well as names of Black Americans who have been oppressed by racial injustice. He is also wearing a Nike hat, on the side of which says one word: Equality. Champ is one of just a few Black golfers who plays on the PGA Tour, and undoubtedly the only one with a social issue emblazoned on the side of his hat.

The 25-year-old explained multiple times Thursday why he has chosen to make a statement in this fashion, with his fashion, just like many other athletes across the country have done. First, during his post-round press conference:

“I have Papa Champ on my sneakers, Black Lives Matter and Breonna Taylor,” Champ said. “Obviously there are some very important reasons why that’s on my shoes. For my grandfather, if anyone knows my story, he grew up in the south, Jim Crow, all those eras through the ’60s, ’70s and ’80s and obviously Breonna Taylor, which is another ongoing issue. For me again that’s kind of where I stand with this. I just want to show my love and support and obviously with my hat, as well.”

Champ used the rest of his press conference to explain how Jacob Blake — the man shot by police in Kenosha, Wis. Sunday — is a human first, regardless of his background, and that “Without dialogue, without talking about it, nothing is going to happen,” and how Black people are incarcerated at disproportionately high volumes.

He was asked if he feels like an outlier on the PGA Tour, where there are only three other Black players with status. He said yeah, in a sense he does.

And then, late in the evening, Champ shared his feelings once again in a simple social post. No hashtags needed. Just words and a photo.