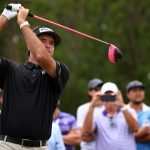 Bubba Watson hits his tee shot on Friday on the 8th hole at TPC Louisiana.

Between Bubba Watson and the 18th hole were a trap and just a few feet of green. In the alternate-shot part of the two-man Zurich Classic, Watson’s partner, Scottie Scheffler, had left Watson with few alternatives.

“Sliced it into the most difficult spot to get up-and-down, but I did it,” Watson said. “So I told him, I said, hey, because he loved Chipotle, and I do, too, so I said, hey, we’re going to Chipotle. If we get this up-and-down, we’re going to Chipotle. But here’s the kicker, though. His wife couldn’t wait for this tournament because they go out to eat; she’s got all the restaurants lined up where they’re going, so he hasn’t had Chipotle this week. And I said, well, we’re going to have to break it to her that we got that up-and-down, and I said, on top of it, y’all are buying.

“So it loosened him up, and unbelievable, it doesn’t matter how good I hit the shot, if we don’t make the putt, and he stroked an unbelievable putt, so it was nice.”

Watson would pitch to 8 feet on the par-5 at TPC Louisiana, and Scheffler dropped the birdie putt. One stroke after hitting one of his worst shots, he hit one of his best, and they enter Sunday’s final round among the contenders. In team golf, players not only have to manage their own games, but oftentimes their partner’s, and Watson has kept his composed with burritos, tacos, salsa and guac.

As Scheffler thought he’d be.

Watson, for sure, has brought the pink driver, TikTok presence and Chipotle bets. But Scheffler, it appears, gives as well as he takes too.

So just how did you two come together, Scottie?

“And then they all said no and he waited for me, and then I waited about four or five days, texted a few guys and no one responded, so I said yes.”

Watson had nothing. He could only manage a smile.

“I uh … we uh … That is pretty much it,” said Watson, who would go on to say they connected through their Bible study.