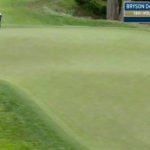 Bryson DeChambeau closed his round with one monster, and unexpected, birdie.

Bryson DeChambeau has never won a major championship, but one Hail Mary putt he dropped to punctuate his third round at the PGA Championship will certainly give him a nice boost heading into the final round.

DeChambeau shot a four-under 66 on Saturday at TPC Harding Park, and he finished it with an exclamation point. DeChambeau stepped to the par-4 18th tee coming off a bogey on the 17th, and his drive found the fairway bunker. From there his approach settled onto the front of the long 18th green, coming to rest 95 feet, 5 inches away from the cup. But this was no two-putt — DeChambeau drained it for birdie.

“I obviously hit it on a pretty good line,” DeChambeau told CBS’ Amanda Balionis. “I don’t know what to say. Sometimes you just gotta hit it out there.”

It was the longest putt DeChambeau has made in his career, according to Balionis.

DeChambeai is now six under for the tournament and three off the current lead held by Cameron Champ and Hoatong Li. You can follow along for the final round here.