Bryson DeChambeau: The Making of a Golfer 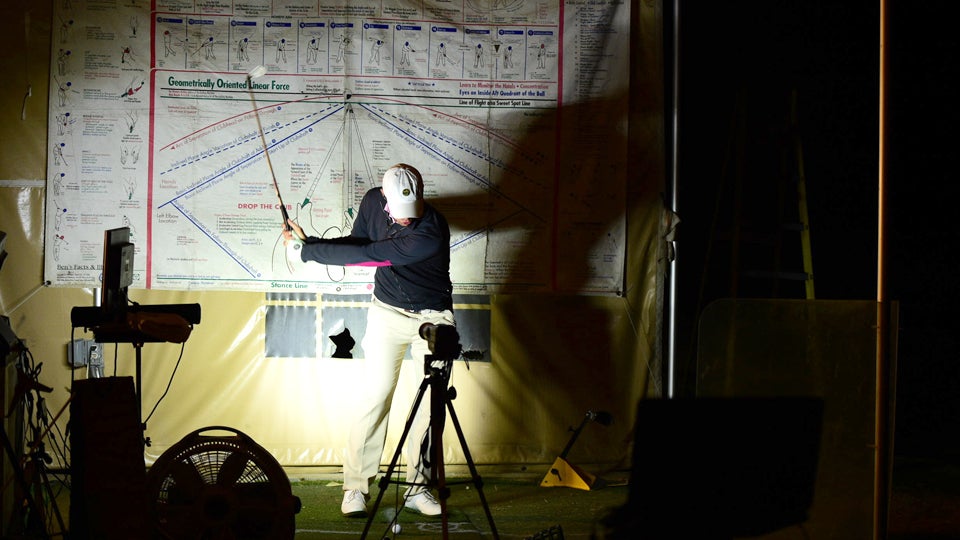 Bryson DeChambeau isn’t a mad scientist. It only seems that way. But as he prepares to embark on a career as a tour player, he will tirelessly tinker, researching every angle in his quest to find the perfect swing — and clubs.

DeChambeau was doing heavy-duty algebra while still in grade school and went on to be the rare college jock with a physics major. His love of science informs his swing, beginning with his reverence for The Golfing Machine. When he hits balls inside coach Mike Schy’s tent, DeChambeau has two computers on which he can analyze every swing, and a pressure plate under his feet records more data. But he’s not a slave to the numbers. “Everyone thinks I’m highly technical, but that’s not really accurate,” he says. “I use the computers to maximize my efficiency and establish a baseline for my swing, but once I’m on the course, I don’t think about any of that. I just play.”

RELATED: Bryson DeChambeau Could Be the Next Big Thing

To groove his swing, DeChambeau spends hours at a time hitting balls with his club tracing the so-called Schy Wheel, the red metal circle pictured above. It is a tangible representation of his desired one-plane swing. Notable in DeChambeau’s action is the extremely flat left wrist and lack of hinge. This helps produce the metronomic repeatability that makes him such an accurate ball striker; DeChambeau calls this swing “the fairway finder.” But at a sculpted 6’1″, 200 pounds, he can also create plenty of power. He has a swing he calls the “crank-a-dank”: He sets up with a wider base and lower hands, and his weight shift is pronounced, all of which promotes more lag. Using this swing with the driver, he can generate 127 mph of clubhead speed, versus his regular 115. “That’s 40 extra yards if I need it,” DeChambeau says. Hearing this, Schy shakes his head and says, “More than that.”

In 2012 DeChambeau took his first set of single-length irons (with their Nike VR heads) to the Kingdom, TaylorMade’s research-and-development facility in Carlsbad, Calif. The engineers who spec’d it out were amazed by the precision of this seemingly crude homemade set, on which DeChambeau had gouged out metal on the more lofted irons to achieve the optimum weight. “Bryson’s hands are incredibly sensitive,” says Schy. “His tolerance is literally one gram.” Over time the clubheads changed from two TaylorMade models to the current ones he uses from Edel Golf. The two heads welded together (above and left) are an old Henry-Griffitts design called a double head. The contraption is intended to show the difference in the lie angle between a 2-iron and a wedge.

DeChambeau’s woods are close to traditional lengths: 44½ inches for the driver; 42 inches for the 3-wood; 40½ inches for the driving iron. Among the notable features of the set are the JumboMax XL grips, which he has used since 2012. He holds the club in his palms, not the fingertips as is traditional, so normal grips were too small. (DeChambeau’s pinkies couldn’t reach the grip, so he initially added gobs of tape.) “Discovering the JumboMax helped everything come together,” he says. And at 82 grams his JumboMaxes nicely counterbalance the clubhead weight, leaving the irons with a C7 swing weight. (Dear readers: Hey, this is the Equipment Issue!) On a recent trip to Augusta National, DeChambeau came across the clubs Bobby Jones used to win the Grand Slam in 1930. He was thunderstruck to discover they were all the same length. “It was an inspirational moment,” he says, “and a validating one.”