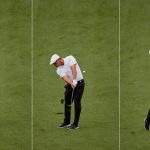 Bryson DeChambeau struggled to get dialed in on Thursday at the Masters.

AUGUSTA, Ga. — All afternoon, Bryson DeChambeau had a difficult time getting dialed in.

The world’s fifth-ranked golfer came into this year’s Masters with high expectations. He’d won at Bay Hill, a course that obviously suited him. He contended at TPC Sawgrass, a course that didn’t. So it was mildly surprising when DeChambeau struggled out of the gate at Augusta National.

He was hardly the only one. DeChambeau’s four-over 76 left him tied with Rory McIlroy and Sergio Garcia. It left him one shot ahead of Jason Day, two ahead of Lee Westwood, three ahead of Patrick Cantlay. The wind swirled. The greens released. Augusta National laid out its challenge in full.

“You’ve got to have every aspect,” DeChambeau said after his round. “You’ve got to iron it well. You’ve got to putt it well. There are some greens that got really, really quick, looked pretty brown. We just couldn’t adjust for it.”

In recent years DeChambeau has worked his way through plenty of golf riddles, but he hasn’t mastered the Masters just yet. He put a new driver into play on Thursday, but said that wasn’t the issue.

“I made a couple of bad swings on my own. Got to go work on it,” DeChambeau said.

He wasn’t particularly pleased with his speed on the greens, either.

“Yeah, just stuff we can’t understand yet,” he said.

But he cited one Augusta-specific challenge that keeps eluding him.

Calculations are kind of DeChambeau’s thing, so it was surprising to hear him admit he’s had a tough time with these. But those slopes? Those are kind of Augusta National’s thing. Those aren’t everywhere on Tour. Awkward lies on approach shots — upslope, downslope, sideslope — are a hallmark of this course’s defenses. Those lies affect spin, trajectory, and carry distance. It’s part calculation, part feel.

One reporter asked about the most devilish combination: hitting off a downhill lie to an uphill green. How often do pros run into those?

“Not very often. It’s just at Augusta,” DeChambeau said. “That’s why I don’t have a problem anywhere else.”

DeChambeau played the last five holes in one under par to salvage his first-round 76. He’ll face down Augusta National again on Friday, where his first task will be making the weekend. His next will be climbing back in contention.

On Thursday, he spotted 12 strokes to first-round leader Justin Rose. On Friday, he’ll tackle those same calculations — and hope the results come out a little better.