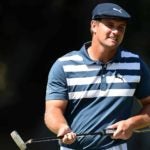 Bryson DeChambeau was dismissive of his Saturday cameraman controversy, calling it a "nothing burger."

In his post-round interview with the media on Sunday evening, Rocket Mortgage Classic champion Bryson DeChambeau was asked about his third-round confrontation with a cameraman he believed was following him too closely after DeChambeau reacted badly to a disappointing bunker shot on the 7th hole at Detroit Golf Club.

“Look, I’m not going to comment anymore on the stuff that happened yesterday,” he said on Sunday evening. “I respect everybody and I think people took it the wrong way and I’m sorry that they did so. I just felt like a minute long for videoing me was kind of a little weird, but we talked it out and it was all great and no issues, no issues whatsoever.”

DeChambeau was criticized on social media when he told Golf Channel’s Will Gray that he was upset the footage could potentially hurt his image and damage his brand. Though DeChambeau seemed ready to put the incident behind him after his Sunday victory, his Twitch followers weren’t, so he addressed the controversy once again on his Twitch stream.

“The guy was videoing me for a minute after a shot, like, a full minute,” he says in the stream, wearily rubbing his eyes. “That’s just, you know, obsessive. I mean, it’s not the cameraman. It’s nobody’s fault. It’s just, there’s gotta be a little bit of respect, that’s all.”

“That’s his job my guy,” one user responds.

“I understand it’s his job,” DeChambeau replies. “Absolutely. I’m not saying he didn’t do his job. I’m saying, if he videos you for a minute after you hit a shot, trying to get you, to capture something, where you could potentially get mad? No. That’s ridiculous. I wasn’t going to get mad anyway. It was just like he was trying to catch me. It wasn’t respectful. And that’s one of those things that’s just not right. That’s all it is. Nothing problem. Not a big deal. Look, much respect for everybody out there. No issues. People are going to make a big deal out of nothing. It was a nothing burger.”

The win on Sunday was the sixth of DeChambeau’s career. He’s taking this week off, but will tee it up again at next week’s Memorial at Muirfield Village. You can watch a clip of his Twitch stream below.