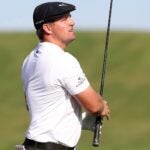 Bryson DeChambeau drove the green at the 300-yard par-4 15th with an iron on Sunday.

It seems as though Bryson DeChambeau does something awe inspiring on a near daily basis lately. On Sunday at the Shriners Hospitals for Children Open, he amazed us yet again.

The par-4 15th hole at TPC Summerlin played 300 yards for the final round of the Las Vegas event, so naturally it was well within drivable distance for nearly every player in the field — DeChambeau included. It should be no surprise that he knocked his tee shot on the green. But what is surprising is that he used an iron to drive the green.

Playing a par 4 like it’s a par 3 is not something you see every day, but with DeChambeau, we’ve come to expect the unexpected. He went on to knock in the 11-foot putt to card his two and momentarily pull within one shot of the lead.

The eagle was just the third on the day on the 15th and the 13th on the week at the short par 4. But after seeing DeChambeau fully neuter the hole, it might be time to consider reclassifying it as a par 3 (I’m mostly kidding).

DeChambeau ended up posting a 66 in the final round and finished 18 under for the week, good for a T8 finish. So while he won’t walk away with the trophy this week, he does leave hitting one of the most absurd shots in recent memory.