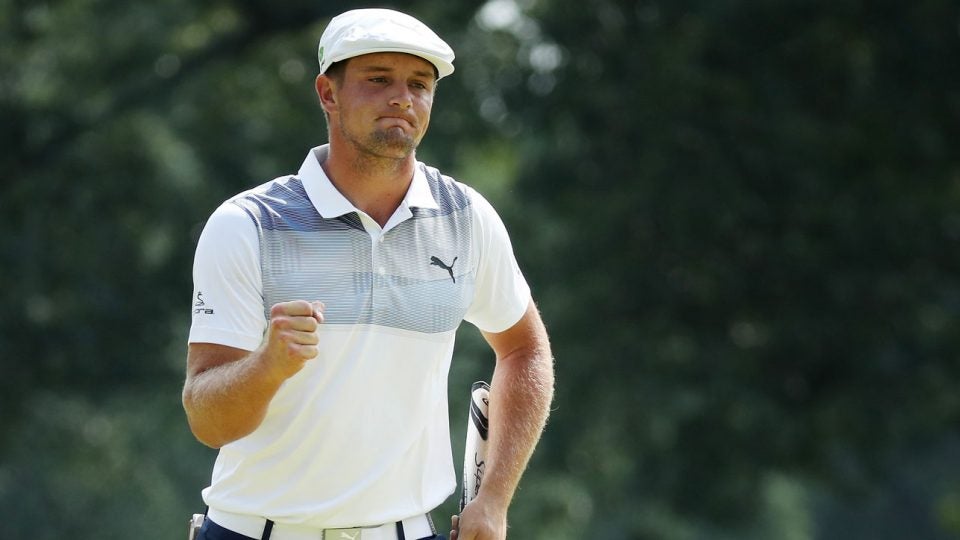 Bryson DeChambeau won the Northern Trust Open at 18 under par.

PARAMUS, N.J. — As the sun set on Ridgewood Country Club following Saturday night’s third round, one player remained on the driving range. There was no way to know that Bryson DeChambeau had just polished off a near-flawless eight-under 63 to blitz to the top of the Northern Trust leaderboard; he attacked the range session as he always does, with a unique desperation at odds with his level of play.

“I’ve always had to work twice as hard as everybody, growing up,” DeChambeau said. This is among his recurring themes; he is obsessed with his own lack of talent. It’s one of the few things he is probably wrong about — he’s undeniably talented — but it’s a delusion that keeps him obsessed with improvement. “I was always a guy that would study for three hours and barely get an A on the test and you would have another guy next to me who would study for maybe 30 minutes and ace it,” he said.

Whatever he was working on Saturday night (“I’m not going to tell you, because it’s my stuff, and I worked hard to get it,” he said with a grin), it paid off. DeChambeau entered the final round in New Jersey with a big lead and slammed the door on his competition, maneuvering his way through a final-round 69 that left him four shots clear of runner-up Tony Finau.

DeChambeau entered the day with a four-shot lead over Keegan Bradley, who joined him in the final pairing. He quickly added to the advantage — birdies at the first two holes took him to 18 under, six shots ahead. But DeChambeau let the field creep back in with bogeys at 3 and 9, and when Aaron Wise birdied the 14th hole he drew within two of the lead. But a Wise bogey at 15 gave DeChambeau some breathing room, and he finished off his challengers at No. 12, where he faced a tricky up-and-down for birdie. He played a clever “stab-and-jab” to four feet and holed the putt.

“That was the most difficult chip shot I had all week, and to be able to execute that under the gun, with the situation at hand where I was kind of leaking back, showed a lot,” he said.

Cameron Smith and Billy Horschel shared third place at 13 under, while Wise fell to a share of fifth with Adam Scott (69) and Ryan Palmer (66). Bradley struggled to a 78 and plummeted from second to 34th.

Even though his final six holes were essentially a coronation, DeChambeau remained in characteristically tight focus to the end. At the par-5 13th, he took a full two minutes just to select a club for his layup. At 16, he was dissatisfied with a fairway bunker shot he’d hit and remained in the sand, rehearsing the swing, plotting what he could have done better. He stormed off the 17th green after a loose chip and dissatisfying par. Even after he tapped in on 18 to secure the title, DeChambeau couldn’t help but focus on his mis-hits down the stretch.

“Wasn’t expecting a couple of the shots I hit; a little nerves here and there,” he told CBS just a minute after the win. These aren’t the actions of a typical Tour winner, but DeChambeau’s manic attention to detail has long been his calling card; weeks like this it looks more and more like a superpower. “I’m just a little different cat,” he said with a shrug.

For all the talk of Bryson the Mad Scientist, two things separate the 24-year-old from his peers on Tour: his work ethic and his attention to detail. Tiger Woods pointed out the way DeChambeau’s vocabulary can distract from what really matters: the effort he puts in.

“I feel a lot of the things that he says, but we articulate it completely differently,” Woods said after his round. “It’s a lot of fun to needle him and give him a hard time about it, but I definitely respect what he says because of the fact that he does a lot of research. I mean, he is very into what he’s doing.”

DeChambeau and Woods now have more in common than frequent practice rounds. Sunday’s win — his third in 13 months — vaulted DeChambeau into lofty territory: before Sunday, the only players to win an NCAA Championship, U.S. Amateur and at least three PGA Tour events before their 25th birthday were Woods, Phil Mickelson and Jack Nicklaus. Now there’s one more name on that list.

Even better, DeChambeau has all but locked up a Ryder Cup captain’s pick. He was ninth on the qualifying points list (eight players automatically made the team) and will surely be selected by captain Jim Furyk come Sept. 4. There’s no question the honor will mean a great deal: DeChambeau loves the event so much he paid his way — flights, lodging and all — to attend the 2016 edition at Hazeltine as a fan.

“Not making the top eight in the Ryder Cup, it was disappointing, for sure,” DeChambeau said.

In addition to a near-certain spot on the national team, DeChambeau moves to No. 12 in the world and first in the FedEx Cup points race, earning the inside track to September’s $10 million mega-prize. But he insisted the cash is not the motivator.

“I don’t play golf for money. I play golf to execute that shot, the beautiful shot that everybody adores. That’s why I think we all play golf,” he said.

He’s wrong again there — plenty of pros do not play golf with those ideals in mind. But it’s DeChambeau’s single-minded pursuit of a better golf game that has endeared him to a growing circle of fans. Still, DeChambeau has also felt the negative ramifications of higher status. On Thursday at the British Open, his club-tossing driving range meltdown went viral. Just a week later, he collapsed down the stretch at the Porsche European Open, giving up the lead with a series of miscues late in the round accentuated by particularly expressive body language.

DeChambeau drew criticism after the event in Germany for not properly congratulating winner Richard McEvoy and sat the following week with Mike Tirico in a solemn, intimate interview that called to mind some great scandal or wrongdoing. He promised to be more aware of his actions. He seemed to have struck a proper balance Sunday, where he repeatedly went out of his way to grant high-fives to young spectators across the grounds while maintaining the frenetic energy inherent to his game. After his win, he was reflective about the ways those struggles have driven his success.

“You know, that’s the thing that people sometimes miss is the fact that those moments when you’re at your — relatively speaking, lowest, are the times when you can learn the most,” he said.

“Well, it wasn’t 54,” he said. “It’s not birdieing every hole, so there’s always room for improvement.”

To hear him tell it, DeChambeau believes that human perfection is nearly achievable. Want to really get his wheels turning? Ask about controlling an uncontrollable variable. Ask him about wind.

“The one thing nobody out here will ever be able to control, is the conditions of the course, whatever it is, and the wind. The wind is always going to be the final — you know, the Holy Grail,” he said, a faraway look in his eye. “We’ll never be able to figure that out.”

DeChambeau wasn’t perfect Sunday. But He was more than good enough. Call him a scientist, or a savant, or just a hard worker. Just don’t call him crazy.

“Crazy is a relative term, you know,” he said. “Everybody is unique in their own way and some people work harder for longer hours than others. You can say what I do is crazy. But at the end of the day, I’m the one with the trophy this week.”