Brooks Koepka withdraws from the Northern Trust, ending his season 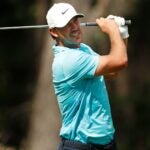 Brooks Kopeka has withdrawn from the Northern Trust.

Brooks Koepka has withdrawn from the Northern Trust on the eve of the start of the first event of the FedEx Cup Playoffs. The WD means his 2019-20 season is over as he currently sits outside the top 75 and will not qualify for the final two events of the PGA Tour’s postseason.

Koepka’s WD marks the end of an uncharacteristically poor season for the 30-year-old as he missed five cuts and had just two top-25 finishes. He also did not record a win for the first time since 2016 and failed to defend his PGA Championship title.

The PGA Tour did not release a reason for Koepka’s WD, but a lingering knee injury that has bothered him since last October is speculated to be the cause. He explained at the PGA Championship that the left knee injury makes it painful for him to get to his left side and causes a multitude of swing faults.

It looked as though Koepka had figured out a remedy to his ailing knee as he returned to his prior form at the WGC-FedEx St. Jude Invitational and started out hot at the PGA. But after a lackluster Sunday in San Francisco and a missed cut at the Wyndham Championship, it appears the knee is still a problem.

“This is physical,” Koepka said at last week’s Wyndham Championship. “I know how to do it, I can do it, I just physically can’t do it …  My golf swing’s fine if I can physically do it.”