Brooks Koepka’s PGA win, the Oak Hill clubhouse, and the other best things in golf this week

Every week (pretty much) GOLF senior writer Michael Bamberger identifies — and ranks — the absolute, undeniably, very best* things in golf right now. This week, he’s fresh off a two-day visit at the Senior PGA Championship at Oak Hill. (*or at least mildly interesting)

For a while, I have been trying to push the idea that the three real senior majors—the Senior PGA Championship, the U.S. Senior Open and the Senior British Open—should be far-more celebrated titles in the game. Phil Mickelson, for instance, who turns 50 next year, has shown almost no interest in senior golf. But wouldn’t it be neat if he made it a goal to win, in the coming years, this triple crown of the 50-and-over set? Or let’s consider a player with an excellent Tour career, a Larry Mize, for instance. Mize won the Masters and three other Tour events. He won three times in Japan. A very fine career, but not a Hall-of-Fame career, right? But let’s say he had he won, over time, this triple crown of senior golf, then would you vote for him to election to the World Golf Hall of Fame? I would! (Not that I’m a voter.) Only two people, by the way, have won all three: Bernhard Langer and Gary Player. Player, in fact, won all three in a single year, 1988, when the British was at Turnberry, the U.S. Open was at Medinah and the PGA was at PGA National.

(Note to various marketing departments: you can’t dictate to us, the golfing public, what events are and are not majors. It’s more delicate than that. Majors are majors because of where they are played and how the courses are set up; who is in the field; the physical nature of the trophy and the names on it; the weight of sporting history; diminished commercial intrusion in the playing and promoting of the event. Also, some more ephemeral things, starting with how much the players care about the events.)

I tried this idea—the importance of this Triple Crown of senior golf events—on the oh-so-measured Mr. Langer, who, by the way, is the only person to have won all five so-called senior majors, the three real ones listed above, plus two “officially” designated other ones, The Tradition (?) and the Senior Players Championship.

“I think it’s a good question, but the Hall of Fame is more than that, you have to be outstanding for many years,” said Langer, who was elected to the Hall of Fame in 2002. “If you won those three senior majors and you hadn’t done anything else, I would say no. You’d have to consider Ryder Cup record, President Cup record, where else in the world he has played and won. What contributions he has made to golf.” It was a steep climb from there. Somebody else said to me, “Don’t waste your time.”

Nobody said this would be easy. 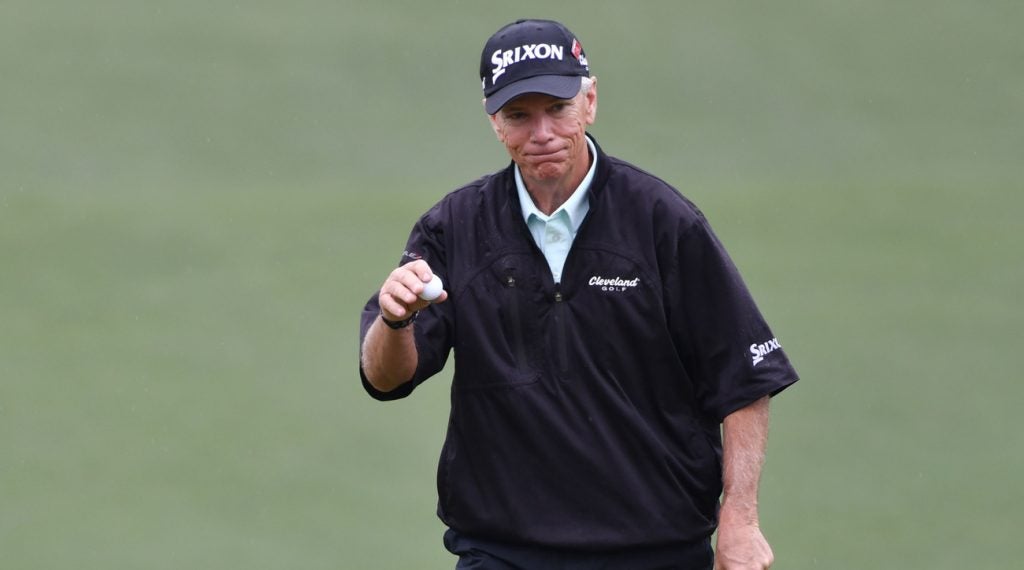 Speaking of Hall of Famers: Retief Goosen, who turned 50 in February, is playing this week in his first Senior PGA, and next week he is getting inducted into the World Golf Hall of Fame, along with Jan Stephenson, Billy Payne, Dennis Walters and Peggy Kirk Bell. Goosen, on the range hitting balls in shorts, stopped traffic. Literally, other players, walking by, stopped now and again to watch him make just a single swing. It is just about perfect. I don’t know what his short game is like, but in terms of his length and the quality of his strike, he looks like an elite Tour player.

Of the Hall of Famers going in this year, the only one with a better swing is Walters, a trick-shot artist paralyzed from the waist down who plays out of swiveling chair attached to a cart. “I’ve seen video of it,” Goosen said. “It’s an amazing swing but the most amazing thing is how he has taken his disability, that cart accident that cut short his playing career, and turned it into a different kind of career.”

It’s a particularly interesting class, the fivesome going in this year. 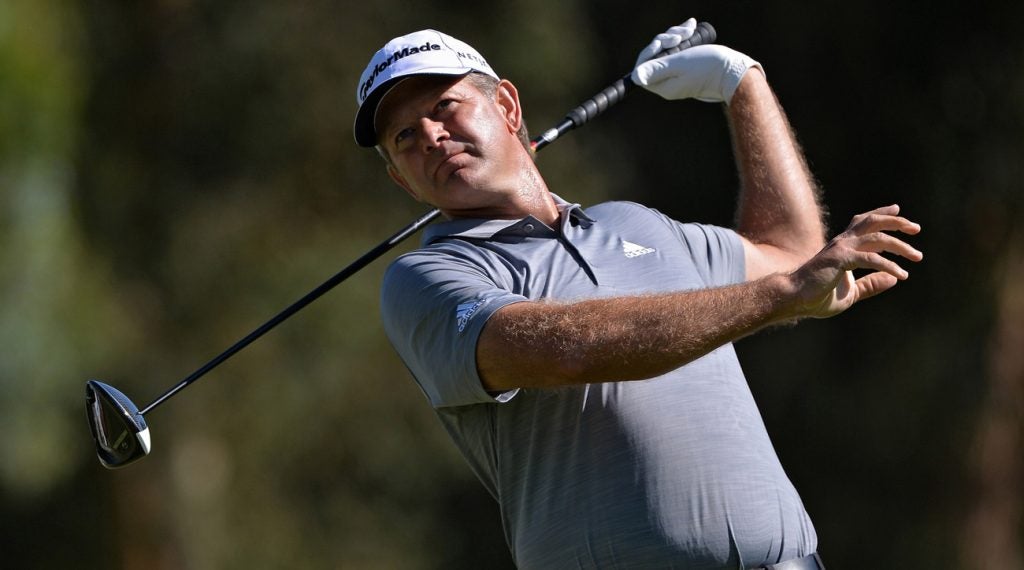 Among the senior set, there continues to be a lot of talk about Brooks Koepka’s sudden ascent into golf’s pantheon, winning four of the last eight major titles. Tom Watson, a two-time winner of the Senior PGA but not playing this week, has been a Koepka believer since last year’s U.S. Open, when Koepka won his second major title. “When he made the putt at the 11th hole at Shinnecock in winning the U.S. Open last year,” Watson said in a recent email, citing the moment he became a BK believer. “For bogey. The way he made it. Rammed it home. I became a Koepka fan.” Watson surely saw something of himself in that putt Koepka made, too. 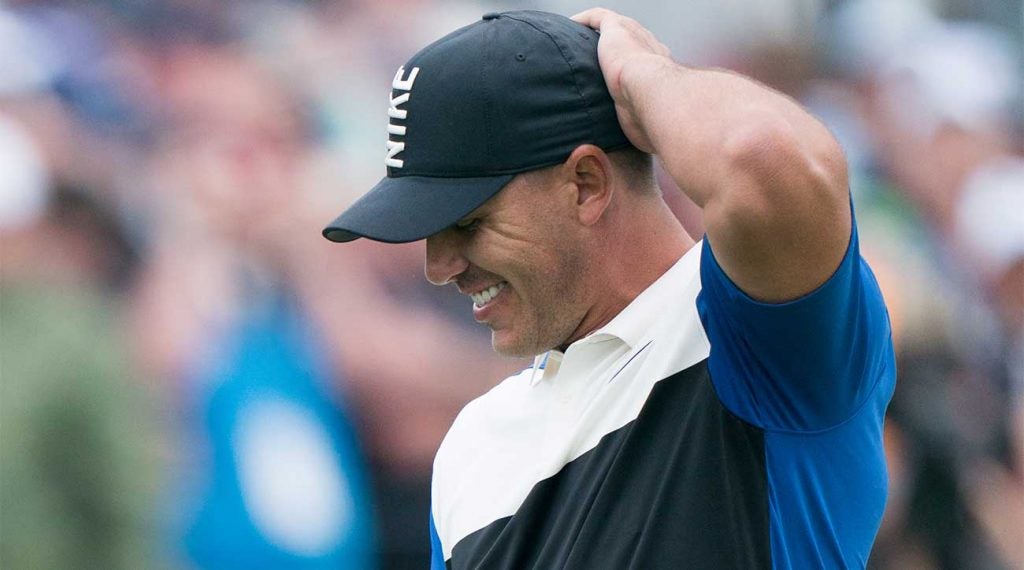 Oak Hill is where Jason Dufner won the 2013 PGA Championship. Shaun Micheel won the PGA 10 years before that. Jack Nicklaus won the 1980 PGA at Oak Hill. Cary Middlecoff, Lee Trevino and Curtis Strange won U.S. Opens on it. It’s easy to get Oak Hill and Oakmont and Oakland Hills confused, but not if you know the courses. Oak Hill is one of the best in the world because it can be a great and enjoyable golf experience for any level of player, and it can be as demanding a course as any in the world. It’s simple, really—and beautiful. It was neat to see Micheel on the course, late Wednesday afternoon, just the golfer and his caddie. You can imagine where his thoughts might roam. It was neat to see Kerry Haigh of the PGA of America, standing on a tee for a solid 10 minutes, just looking, thinking about different scenarios and possibilities. Rory McIlroy described Haigh last week as the best course-setup person in the game. He obviously loves his work, and is happy to be in the background.

The Oak Hill clubhouse has a bowling alley. Also, Claude Harmon’s 1948 Masters jacket! One of Claude’s sons, Craig, was the longtime head pro at Oak Hill. Who knows how much Augusta National would like to have that wooly coat, with a couple moth holes in it, back? But that’s not happening. Talk about a treasure. 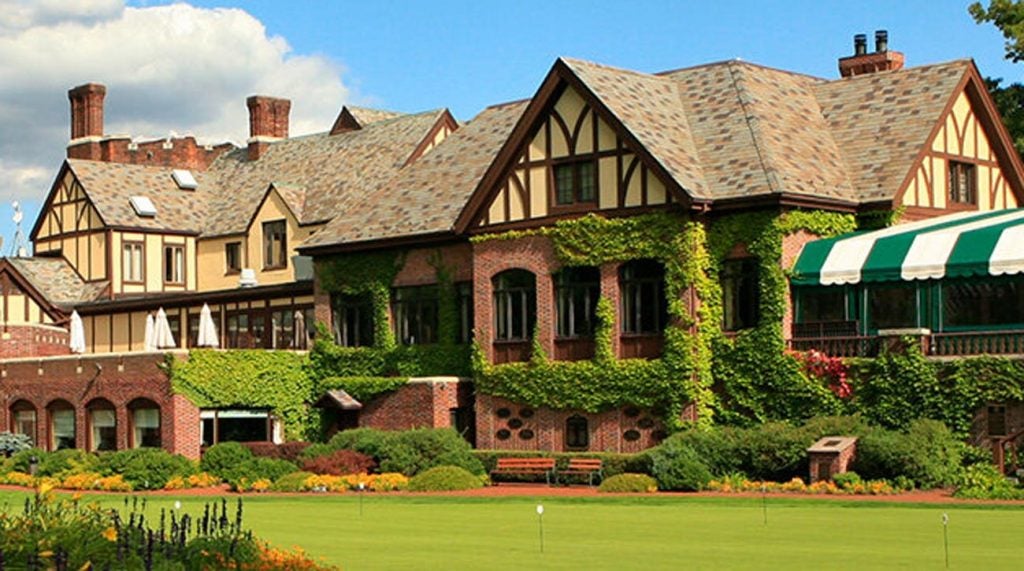 Until this week at Oak Hill, the last time I saw the professional golfer Clark Dennis was at the 2001 U.S. Open (won by Retief Goosen). He played some on the PGA Tour. He played more on the Nationwide tour. He played here and there and everywhere. He turned 50 in 2016, and since then he has won four times on the European senior tour, called the Staysure tour. Fifty-four hole events, not cut, small fields. He won about $85,000 for winning a senior event in Mauritius last year! I asked him who he was working with. “Nobody, he said, with notable good cheer. “When I turned 50, I just decided to play.” He’s never played better.

Andy Martinez is caddying this week for Tom Lehman. Andy Martinez’s caddying career qualifies him for the senior tour—he first caddied on Tour in 1968. Which is amazing, because the guy looks to be his mid-50s. He’s in the Hall of Fame, by the way, the Caddie Hall of Fame. He got in in 2016, the same year as Johnny Miller. Andy carried for Johnny. Johnny carried for Bing Crosby. Bing Crosby was one of the first guys to make professional golf cool, even though he was a lifelong amateur. He’s in the World Golf Hall of Fame, as he should be. 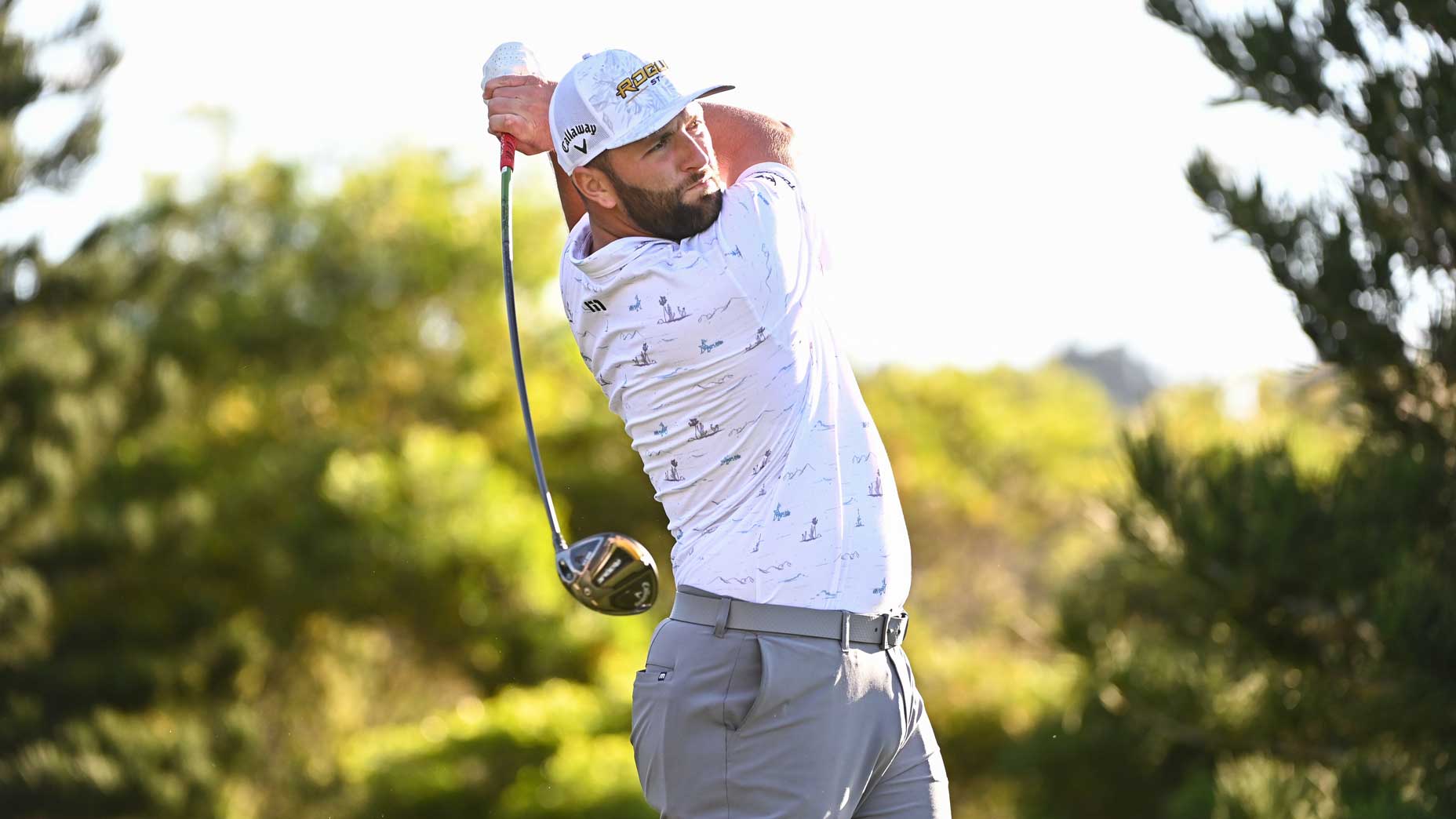 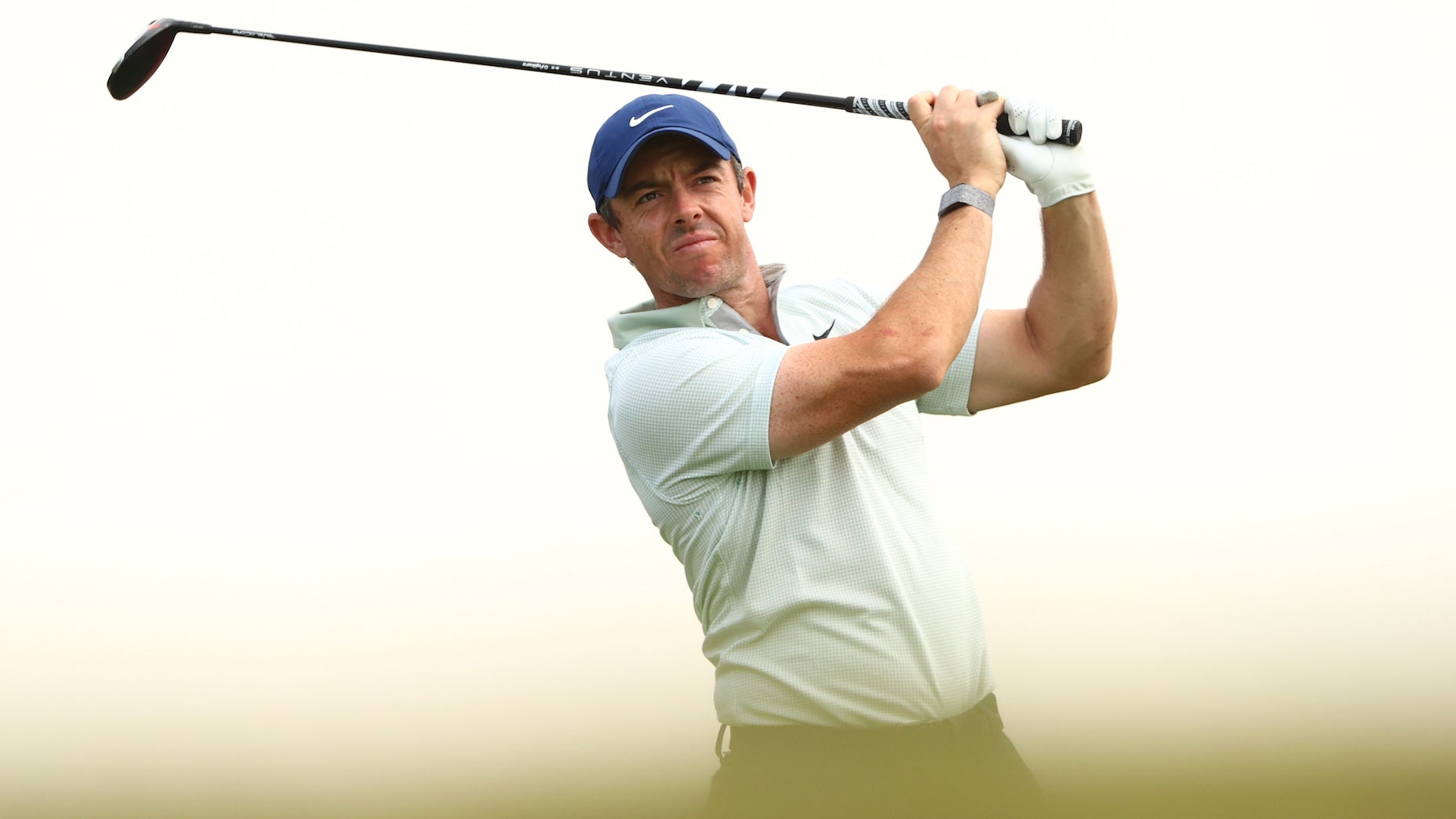