What does Brooks Koepka need to do to get a little respect? Koepka dominated the golf world in 2018, but he’s nowhere to be found on a recent a year-end list of the most dominant athletes in sports. The latest snub did not go unnoticed by Koepka, who responded publicly in his own way.

ESPN.com released their Dominant 20 ranking this week, highlighting the 20 top athletes of the year. When the No.1-ranked golfer in the world checked it out, he noticed his name was not included. Unable to let the slight go, Koepka took to Twitter to announce his displeasure. The three-time major champion tweeted the list of 20 names, adding three “face with monocle” emojis as his message.

The lack of attention and praise he’s received has become a major side-story to Koepka’s incredible Player of the Year campaign in 2018. He began the year with an injury that kept him out of the Masters field. But he came back with a vengeance.

First he won the U.S. Open at Shinnecock Hills, defending his title from the year before. In doing so, he became the first back-to-back U.S. Open champ since 1989. He then backed that win up by capturing his third-career major at the PGA Championship in August, eventually rising to World No. 1. No one had won both the U.S. Open and PGA in the same year since Tiger Woods in 2000. 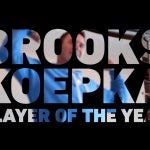 You may also like ‘I am who I am’: Brooks Koepka on his big season, lofty goals and why he’s his own man

But Koepka made it clear repeatedly throughout the year that he wasn’t receiving the respect he deserved from the golf media and fans. At his U.S. Open champion’s press conference, he said, “I’m always overlooked.” At the PGA, he lamented not being interviewed after his opening 69. After his win, he said, “I don’t care what anyone thinks about me.” Then in September he was left off the list of pre-tournament press conferences at the Tour Championship.

When looking at some of the names on ESPN’s most dominant ranking, it’s hard not to agree with Koepka’s complaints. While his name doesn’t appear there, one golfer is included: LPGA star Ariya Jutanugarn at No. 4. Jutanugarn captured one major in 2018 and is ranked No. 1 in the World. Tennis legend Novak Djokovic, a winner of two of that sport’s grand slams, comes in an No. 10. Heck, Lebron James comes in at No. 13, and he didn’t win a championship or even the NBA’s MVP award. That went to James Harden who comes in below James at No. 20. 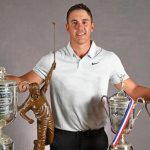 You may also like Tour Confidential: Is World No. 1 Brooks Koepka golf’s new alpha dog?

Koepka may be on to something, as evidenced by an anecdote he relayed at Bellerive in August. While lifting with fellow pro Dustin Johnson prior to the third round, fans fawned over DJ but didn’t even recognize Koepka. “I use it as motivation. You can’t hide when you’re on the top of the leaderboard. You can’t hide my name.”