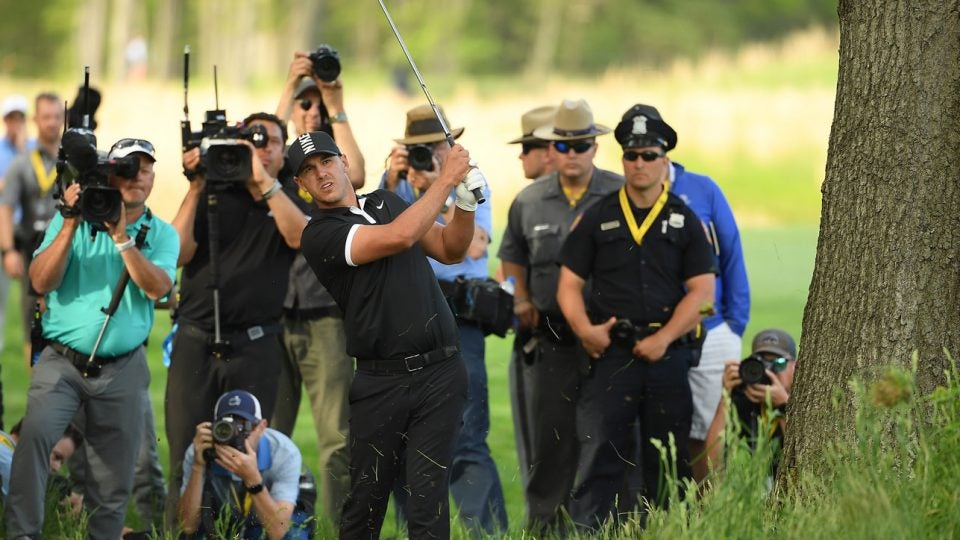 Brooks Koepka found the rough more often Saturday than he had all week.
Getty Images

FARMINGDALE, N.Y. — It’s not a broken record. It’s just Brooks Koepka. After a sound even-par third round, the man leads the PGA Championship for a third-straight day here at Bethpage Black.

The third round didn’t come as easily to the 28-year-old as the first two. Despite playing the first eight holes in a flawless two under, Koepka made back-to-back bogeys on holes 9 and 10. He then scrambled for a par on 11, showing signs of a loose driver.

When he flared his drive into the right rough on the par-5 13th, it seemed he would lose another good scoring opportunity. When his layup from the rough also found the long stuff, par seemed like it would be his best result. Not this week for Koepka. He crushed a wedge from the thick stuff to 17 feet, and curled in the birdie putt to push him to 13 under. He’d finish with four pars and a bogey to shoot 70. His 12 under score is seven clear of the field.

Right now, the biggest threats to Koepka are similarly long hitters, Luke List and Dustin Johnson. Both players made up little ground, though, and will both start Sunday seven shots back and playing in earlier pairings. It might not make much a difference. Koepka is taking the life out of the the tournament. Just ask Xander Schauffele.

“I don’t know if the tournament is just less fun because I’m 15 shots back or what it is,” Schauffele said. “But it’s very melancholic after today I’d say, just because every time I look up, I’m 10 to 12 back. So no one likes to play for second, but that’s sort of what he’s doing to us.”

What he did Saturday was keep everyone at the same distance. Bethpage Black certainly helped. The host course capped the best rounds of the day at 67. Jazz Janewattananond and Harold Varner both eked out those scores. Everyone else was two under or worse. Daniel Berger, who entered the day within shouting distance of Koepka at four under, made seven bogeys and a double en route to 78.

Koepka will play the final round with Varner Sunday afternoon, and in the matter of a few hours, he’ll have the chance to make all kinds of history.