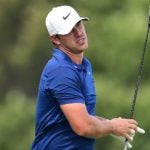 Brooks Koepka's last three starts haven't been up to his standards.

Brooks Koepka’s short game coach, Pete Cowen, won’t deny that his four-time major-winning client has been struggling. But he’s confident there’s a road back to the top.

In a Daily Mail interview on Tuesday, Cowen pulled no punches. First he acknowledged that if he was a racehorse trainer, he’d give his thoroughbred “absolutely no chance!” But golf isn’t horse racing, and Cowen made it clear that Koepka always rallies for big events.

“This is going to be his biggest test yet, because he knows he’s not swinging the club well and he’s not happy with his game. But we all know golf, so let’s see if we can help put him back together again,” Cowen told the Mail.

What a difference a year makes. At last year’s WGC-FedEx St. Jude Classic, Koepka had something of a coronation. He’d just capped off a ridiculous major season with a 4th-place finish at Royal Portrush and arrived in Memphis with a full head of steam. He brushed off talk of a rivalry with Rory McIlroy, showed up to the course just 40 minutes before his final-round tee time and went on to thump McIlroy from the final group, cementing his status as clear world No. 1.

Now? Koepka isn’t even within shouting distance of the world’s top spot. Nay, that spot belongs to Jon Rahm, who acknowledged Tuesday that, “yeah, Brooks is having a hard year right now, he’s not playing his best — but he has won four majors in the last few years.” Ah, yes. Those four.

Koepka, now world No. 6, has gone MC-T62-MC his last three starts. The week before that, he withdrew when his caddie Ricky Elliot tested positive for the coronavirus. Nothing has come easy since the start of this PGA Tour season, when Koepka got stem cell treatment on his knee and tried to return at the CJ Cup before WDing there and ultimately skipping the Presidents Cup, too. He’s made it clear that his knee still isn’t quite right, and it’s showing in his results: Koepka sits at No. 155 in this year’s FedEx Cup standings.

So how does a struggling superstar stage his comeback? According to Cowen, Koepka should take notes from golf’s most famous comebacker.

“It used to be a cliché when Tiger was struggling, he’d tell everyone that he might not be playing well but he was getting there,” Cowen told the Mail. “Brooks needs to think of it in terms of work in progress.”

Thus far, Koepka has differed from the Woods approach of old in one way: his consistent candor. “I just need to play good. I’ve played so bad lately,” he said at last week’s 3M Open. Not something you’d be likely to hear from Woods in his prime. Still, Koepka mixed in plenty of that look-ahead optimism, too.

“I mean, it’s one swing away,” he said. “Everybody knows that golf’s that game where you make one good swing and everything clicks and it’s like, ‘All right, back to normal.’ So I’m just trying to find that and keep battling through it.”

One thing Koepka does have going for him these next two weeks: Good vibes. WGC-Memphis is the site of his three-shot victory, his biggest non-major win. The following week is the PGA Championship, which Koepka has won each of the last two years. He’s developed a reputation for seeing raised stakes and raising his game accordingly. Doing so for this stretch might be his most impressive rise to the challenge yet.

“Everyone has to go through these mental tests but I’ve no doubt he will come through,” Cowen said. “It’s such a funny game, it wouldn’t surprise me if it was this week in Memphis, given he’s got such a good record at that course.”

Maybe just the right place for things to click.

Koepka tees it up alongside Patrick Reed and Viktor Hovland in one of this week’s featured groups when play begins on Thursday at TPC Southwind.