British youth shocked to find Claret Jug in his bedroom 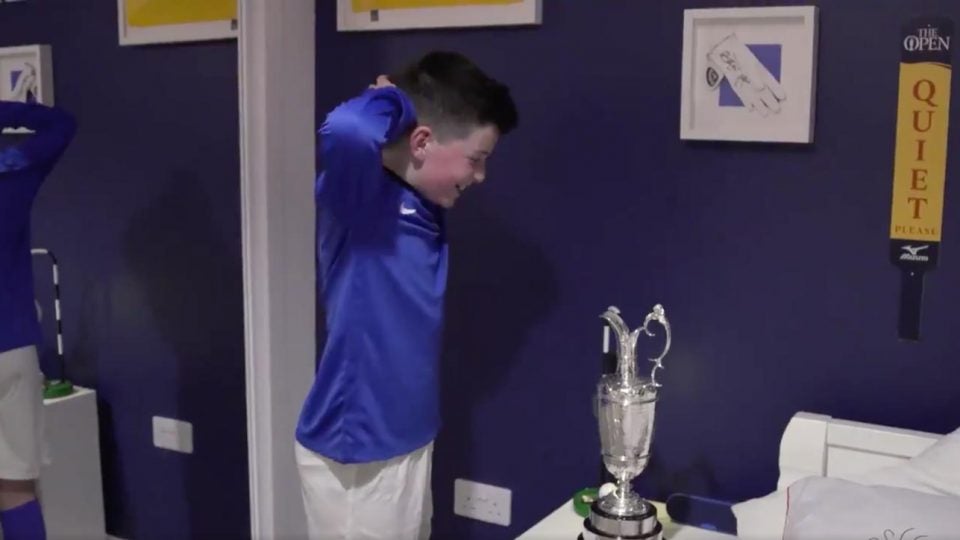 Joshua Marshall found quite the surprise.
The Open

When Laura Marshall posted a photo of her son’s British Open-themed bedroom to Twitter, she had no idea the Claret-themed surprise she set in motion.

Marshall’s 11-year-old son Joshua had thoroughly enjoyed his trip to Carnoustie over the summer. He’d collected signatures, photos, and merchandise from the course and some of the game’s best players, including Rory McIlroy and Justin Rose.

Thank you so much to @McIlroyRory for making Joshua's year! Not sure he'll use that glove again. Good Luck for The Open. ⛳🏌 #TheOpen pic.twitter.com/DVIRJL0zsl

Another fantastic day at @TheOpen – Joshua set out to get 3 Signatures on his little glove of his favourite golfers, Thank you to @McIlroyRory @JustinRose99
he's now hoping @TigerWoods helps him complete it before Sunday. ⛳🏌#TheOpen pic.twitter.com/ShZ8aKp5Sx

Upon returning to his Dundee home, Joshua was determined to turn his room British Open-themed. With the help of his parents, his wall got a makeover. Yellow autographed flags, a “QUIET” sign and a framed golf glove dressed up a neat navy wall. The color scheme matched that of Carnoustie itself. Laura’s tweet showed off her son’s room and mentioned that he was “still buzzing” from his summer adventure.

When your 11 year old is still buzzing from the @TheOpen and wanted his room done to keep all his memories from Carnoustie. Lots of great signatures on that wall. #CarnoustieOpen #TheOpen18 #Golf #Memories pic.twitter.com/COX3buyOXW

The post soon amassed well over 1,000 likes, garnering the attention of the R&A itself. The governing body decided to surprise Joshua by topping off the room decor with…the Claret Jug itself. They sent a camera crew to document the moment where the young golfer walked in to the surprise. “No way,” he said, open-mouthed. “Are you joking?”

You can watch the complete video below:

Imagine coming home to find the Claret Jug in your bedroom 👇😄 pic.twitter.com/RLQSzGgyUL

Laura took to Twitter again after the video was released to thank the R&A as well as the general public. “WOW, what a 24 hours!!!” she wrote. “Huge Thank you to @RandA & @TheOpen for this huge surprise for Joshua, The Claret Jug in his Bedroom & the bag of open goodies – Such a kind gesture, and one we are very grateful for. Thank you to everyone to you all kind responses too!”

WOW what a 24 hours!!!
Huge Thank you to @RandA & @TheOpen for this huge surprise for Joshua, The Claret Jug in his Bedroom & the bag of open goodies – Such a kind gesture, and one we are very grateful for. Thank you to everyone to you all kind responses too! #TheOpen pic.twitter.com/yDjKcKyMCF

According to the Daily Record, Joshua has been playing golf since he was two years old and plays to a handicap of 27. He plays for the junior team at Ballumbie Castle Golf Club and Angus County.