British Open 2019: Why the Open Championship matters more now than ever before

Golf fans: don’t reach for that clicker now. The Tour’s revamped, rejiggered and rearranged season is entering the homestretch. On tap, the final major: the Open Championship. Or — fine — if it suits your tastes, the British Open.

Unlike several Tour stops this year, including the PGA Championship, the Open hasn’t shifted from its traditional place on the calendar. It’s once again tucked into July’s third weekend, right after Wimbledon. That feels like the right spot for the Open – it’s been staged in July each year since 1937. (The first Open, in 1860, was played in mid-October; in 1893, the R&A wisely and permanently shifted it to warm-weather months.)

This year is a different kind of Open and not just because of the Irish host venue. The Open has managed to change without changing its date. As the major season’s anchor leg, it’s even more significant.

The R&A will now crown the Champion Golfer of the Year and the Year’s Final Major Champion in one fell swoop. And with apologies to the PGA of America’s marketing department, the Open will never be Glory’s Last Shot. It’s always been more than that.

As golf’s oldest major, the Open is a living representation of golf’s origins. Ever since Willie Park Sr. clipped Old Tom Morris by two shots at Prestwick in ’60 (again that’s 1860), the Open remains steeped in history and tradition. Classic links courses. Wild weather. Yellow scoreboards. Fescue. The claret jug. It’s the sport’s past, present and future all in one event.

Wrapping up the major season in Ireland in July feels strange now, just as March’s Players Championship and May’s PGA Championship at first seemed disorienting. But the Open is perfect for the anchor spot for its prestige alone. It was here first, and now for the foreseeable future, it’s here at the end. 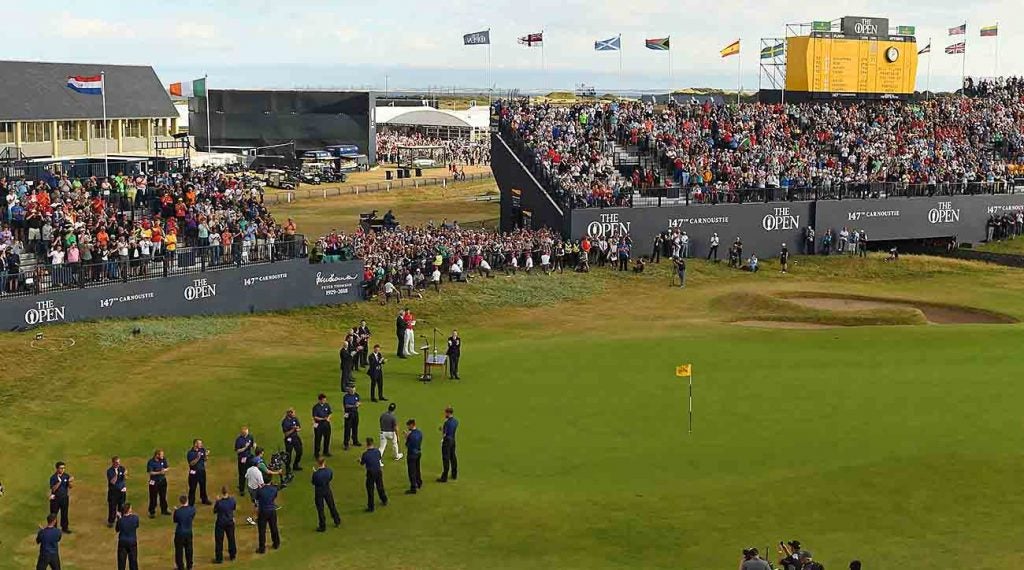 Francesco Molinari accepted the claret jug in front of a packed house in 2018.
Getty Images

Here’s one more thing that sets it above other majors. Rain or shine (or sleet or snow or anything else that might blow in), Sunday evening will produce one of golf’s greatest scenes. Each year at the Open, the R&A erects a massive grandstand around the 18th green – the bleachers’ size and scale is perhaps eclipsed only at the biennial Ryder Cup. When the winner putts out on that final green, he will disappear beneath those grandstands for about 20 minutes. Maybe even 30. He will sign his card and do a few TV interviews. He will shake many hands, slap many backs and enjoy a nice moment with the assorted members of his team. And through it all, those bleachers will remain packed, even as shivering fans have nothing to watch but an empty putting green.

Eventually the claret jug will be rolled out, along with a microphone and the new champ. He’ll say a few words and lift the silver cup. Fans will go bananas. They love it. As the TV camera pans the scene, go ahead and try to find an empty seat. The screen will then fade to black and thousands of the fans will file out of the bleachers and head home delighted to have witnessed another chapter of golf’s history. Just feels right, doesn’t it?