The Open 2019: Lee Westwood’s girlfriend is also his caddie this week at Royal Portrush

Don’t look now — OK, fine, go ahead and look — but Lee Westwood is off to a fast start at this 148th British Open, after an opening with rounds of 68 and 67 to post seven under par at Royal Portrush. The 46-year-old Englishman, playing in his 25th Open, is still searching for his first career major title after ringing up too many close calls to count in his career. Maybe this week will be different.

If Westwood does carry some new mojo, it might come from his girlfriend, Helen Storey, who is also caddying for him this week. Westwood has reportedly been dating the consultant/Instagram model for about three years now. GOLF.com is not generally plugged into the relationship status of 46-year-old Tour pros, but the British tabloid The Sun has more details about their relationship, and Storey’s work on the links the week. I enjoyed this quote from Storey:

“It was hard work at times for me. That Tour bag can get pretty heavy, especially on the par-5s, but it always feels a bit lighter after he’s made a birdie.” 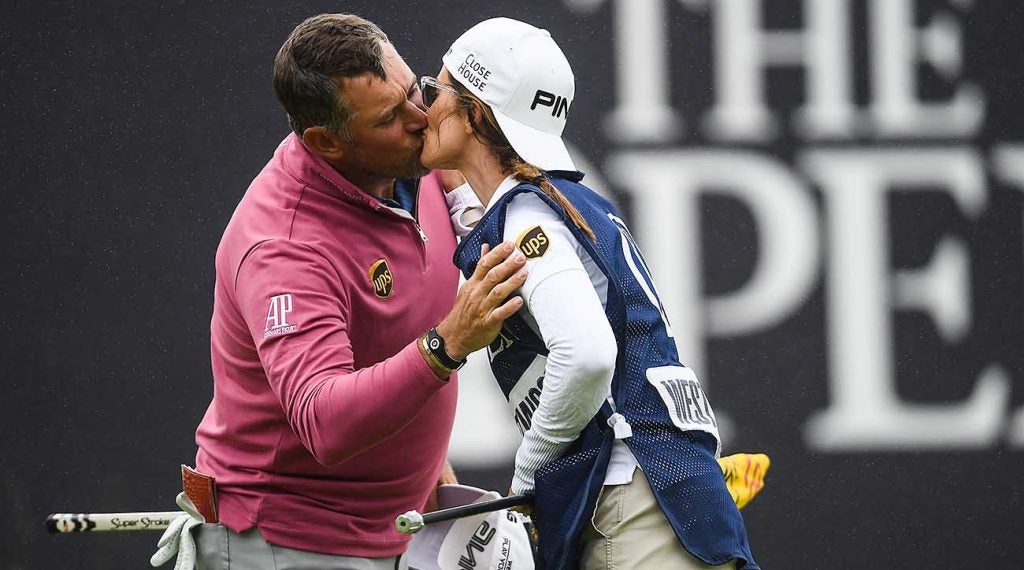 Anyway, Westwood split from long-time looper Billy Foster last year, and Storey has more or less toted the bag ever since.

“Obviously I get on well with Helen,” Westwood said Friday at Portrush. “She doesn’t know too much about golf but she knows a lot about the way my mind works. So she keeps me in a good frame of mind and focusing on the right things at the right time. There’s more to the caddying than carrying and getting the wind direction.”

Westwood was what he and Storey discuss on the course. “Dinner,” Westy said. “Where we’re going on holiday. Whether there’s a nail file in the bag.

“You’d be surprised the sort of things we talk about out there. The favourite one was from Denmark the first week she caddied for me, and I took out a divot because it was big and soft and she’s walking back with the divot like this, and I said, ‘What’s wrong?’ She said, ‘I hope there’s not a worm in this.'”

Westwood is up against a lot of history this week. Among his major near misses: second place at the Masters in 2010 and 2016, and another runner-up at the Open in 2010. He’s also finished third three times (2009 PGA Championship and the 2008 and 2011 U.S. Opens). For several years, he was almost indisputably the best player in golf without a major.

Westwood and Storey shared an 18th-green smooch on camera (according to the Sun, it’s a little post-round tradition they share) and apparently the fans swooned. Could these two become golf’s new “it” couple as Westwood makes a run this week? Brooks and Jena, you’ve been warned.