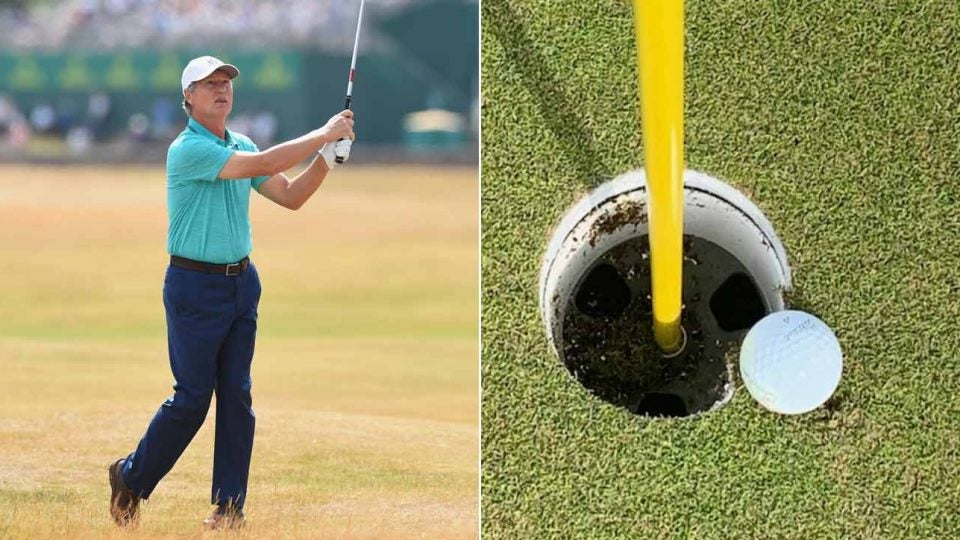 If you don’t like Brandel Chamblee, you’re going to love this. The Golf Channel TV man and former PGA Tour pro laced up his spikes yesterday for the final stage of PGA Tour Champions Q-School. But on Tuesday Chamblee was robbed blind during the first round, though he wasn’t liberated of any cash, just a memorable hole-in-one.

This year’s Q-School is taking place at TPC Scottsdale in Arizona, home of the Waste Management Phoenix Open, and Chamblee played admirably on the opening day, but it could have been so much sweeter.

At the par-3 6th, the former Tour winner had 187 yards to the hole. His tee shot wasn’t perfect, but it was pretty much as close to perfect as humanly possible. As Chamblee wrote in a Twitter post after the round, he flew his ball “186 [yards] and 10 inches” on the 6th, almost directly into the cup. But somehow his ball moved no farther and embedded itself right on the edge of the cup, so much so that it pushed turf into the hole.

Fortunately, Chamblee shared a photo of the frustrating outcome on Twitter, asking the same question everyone who sees the picture will ask: “How did that not go in?!??”

In case you were wondering, Chamblee’s shot definitely doesn’t count as a hole-in-one. According to the Definitions section of the Rules of Golf, when a ball is embedded in the side of the hole, and all of the ball is not below the surface of the putting green, the ball is not holed. That cruel turn of events added a shot to Chamblee’s scorecard and prevented him from collecting what reportedly would have been his 6th hole-in-one.

Rules
Is this embedded ball a hole-in-one? A comprehensive investigation (and multi-part answer)

Despite the turn of bad luck, the 57-year-old commentator was still able to put together a solid round of two-under 69. That leaves him T17, four off the lead. The top five finishers at this week’s final stage will earn PGA Tour Champions cards for next season, so he’s still very much in the mix.

At the very least, Chamblee has set himself up for the best Senior tour finish of his career. In five tournaments in 2019, his top result was a T46 at the Ally Challenge in September.