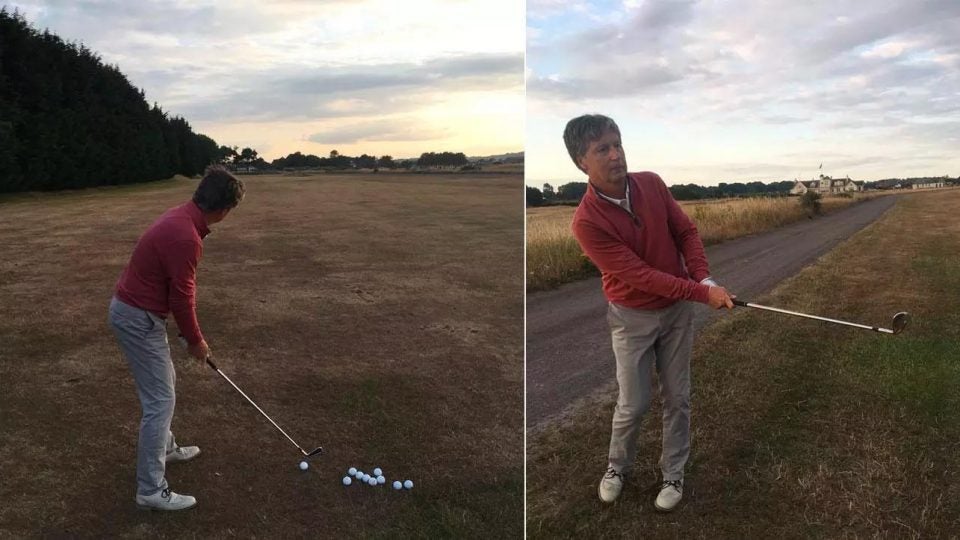 CARNOUSTIE, Scotland — Many media members bring their golf clubs to Scotland as they cover the British Open. With the sun rising before 5 a.m. and setting around 10 p.m., there are more golf hours in the day here than, say, Orlando.

And so, with a bevy of courses located near Carnoustie, there’s a lot of pre-golf golf and a lot of post-golf golf. No media member is taking that schedule more seriously than Golf Channel analyst Brandel Chamblee.

Chamblee, 56, has been living 18-hour days here in eastern Scotland, banging balls on a nearby driving range in the morning before heading to work at Carnoustie, only to return to that range for evening practice later on. He hopes the extra reps will help him Monday, when he competes in a qualifier for next week’s Senior British Open at St. Andrews.

Golf’s most polarizing analyst is returning to competitive golf 15 years after his last full season on the PGA Tour. Chamblee played 14 full years on Tour and won one title, the 1998 Greater Vancouver Open. Now, for the first time in over a decade — he claims, raising his hands — he has calluses on his palms.

Chamblee has used those 15 years off to begin a new career as a leading analyst at Golf Channel. Off camera, he dived into the instruction industry, penning a book in 2016, and is in the process of writing two others. He’s made countless headlines in his critiques of Tour players and, quite plainly, has also ticked off a lot of people of Twitter.

It’s clear he doesn’t mind the attention, but it’s far different than what he experienced as a player. So why now, at 56, jump back into competitive golf? “I love doing my job, but I want to see if I can make full use of all the time I’m off,” he says. “I just want to see if I’m able to put to use all the things I’ve been studying for years and years and years. And use myself as a guinea pig.”

The inception of his comeback came about 120 days ago via a simple question from his wife: “Why don’t you see how good you could get again?” It was around that time that Bailey Chamblee — with shades of Sergio Garcia’s wife Angela — wrote “120 days until the Senior Open” on Brandel’s bathroom mirror, updating the tally as it counted down to July.

Fast forward to this week and Chamblee is grinding at Panmure Golf Club, just a half mile from Golf Channel’s TV compound. Chamblee made multiple trips there Tuesday — three hours in the morning, a couple more at night — and returned Wednesday evening. On Saturday and Sunday, he played Scotscraig Golf Club (the location of his upcoming qualifier) before show rehearsal. Last Friday, he got reaquainted with the Old Course, where he played the 1995 Open (ironically, qualifying for that one through Scotscraig as well). “I hit the ball great,” he said. “I didn’t score particularly well.” He hasn’t lost the Tour pro vernacular.

It all presents a very interesting week for Chamblee, whose on-camera analyst schedule — beginning each day with a production meeting at 11 a.m. — offers little time to focus on anything but Carnoustie. Golf Central Live From the Open finishes at 10 p.m. each night. Morning practice it is. He figures he needs just five hours of sleep to do it all, and do it well. He believes many of his viewers can relate to his quest. “Our audience watches because they’re hoping to get better,” Chamblee said. “Well I’m our audience. I’m our target audience. I’m a 56-year-old man that plays. I’m exactly our demographic.”

What would Chamblee the analyst say about Chamblee the golfer? He paused a beat. “Oh gosh, he would — uh — I don’t know. I analyze my swing all the time and I’m disgusted with it. I look at it and all I see are flaws.”

It’s hard to turn off the analyst switch. Next week he’ll give it his best shot.