Struggling with where to place blame in the Garcia-Kuchar mess? This one was all on Sergio

Perhaps we should have expected an untoward occurrence when two Tour villains squared off in the WGC-Match Play quarterfinals this past weekend. Matt Kuchar vs. Sergio Garcia. The gringo in the black hat vs. the Spaniard with the black cat. The pro who lowballed his local caddie after taking home a $1.296 million paycheck vs. the self-pitying underachiever who blames bad luck for blown majors and demolishes bunkers when the sand isn’t to his liking.

Garcia’s petulance over the years has been one of the few constants in a career charred by expectations and inconsistency. But if he got off somewhat lightly after his brattish behavior at the Saudi International a couple of months ago, he paid dearly for such behavior in his clash with Kuchar. Following a seven-foot miss for par to win the seventh hole at Austin CC on Saturday, Garcia made a hasty, backhanded stab on the four-inch leftover, which circled the rim of the hole and spun out.

Kuchar was already in with a bogey and never had much of a chance to concede Garcia’s tap-in, as an angry Sergio moved so quickly to his ball. Rules official Robby Ware arrived on the scene to sort out the mess and awarded the hole to Kuchar, whose attempt to offer a retroactive concession had become irrelevant once Garcia struck that tiny putt.

“He knew he had made a mistake,” Kooch said. “I didn’t want that to be how a hole was won or lost.”

News
As the Garcia-Kuchar concession affair reminds us, the Rules of Golf do not allow for intent

So, it was just another case of Sergio being Sergio, except that some creative minds are finding Kuchar largely at fault. Why wasn’t he standing on the green’s edge, where he could have immediately granted the concession? Why was it Kuchar who called in Ware for the ruling? Was it guilt that led him to make the request?

Most significant, if Kuchar was sincere in his intent to not let the matter affect the match, why didn’t he accommodate Garcia’s suggestion to concede a hole and even things up? Much like the backlash that ensued with the caddie in Mexico, Kuchar is getting beaten up for how he handled the situation once an actual “mistake” had transpired.

This time, the blame is misplaced, the reaction a joke. Garcia is 39 years old going on 12. How is that his opponent’s fault?

We’re not talking just about critics lying in the weeds or hiding behind a Twitter feed here. European Tour veteran and former Ryder Cup captain Paul McGinley pulled out the rifle during a post-match show on Sky Sports: “You see the smiley, nice Matt Kuchar. You’ve seen the incident with the caddie. There’s a hardness about him. Don’t be fooled by him.”

With all due respect, Mr. McGinley, you are the one fooled. Connecting the two incidents with an implication of exonerating Garcia falls somewhere between illogical and irresponsible. Kuchar may not actually be Mr. Happy Go Lucky, but that has nothing to do with his role in Concessiongate. 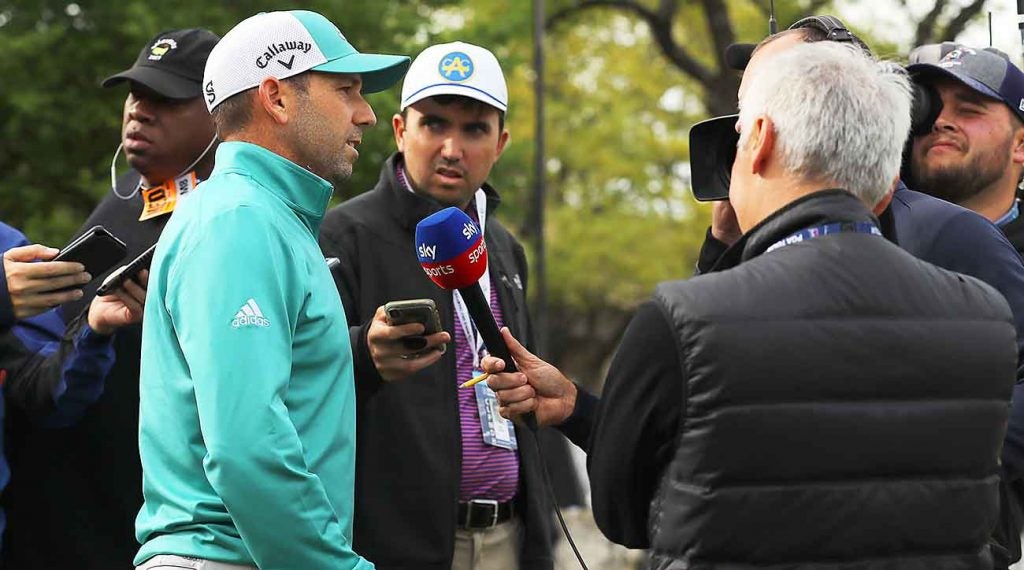 Garcia met with reporters after his bizarre match against Matt Kuchar.
Getty Images

Frankly, he has no role. This is a cut-and-dried instance of a player once again losing his cool, an impetuous act that ultimately came with significant consequences. What should have been a victory for Garcia on the seventh hole instead became a 2-down deficit and an eventual loss on the 18th green, which is simply another way of saying he had 11 holes left to get over himself and advance to the semis.

He accomplished the first task, if not the second. “It’s quite simple — I screwed up,” Garcia admitted afterward. “There are many options if you don’t want to [win] the hole [like that], but obviously, he didn’t like any of the options that were there. It’s fine. At the end of the day, I’m the one who made the mistake.”

Hats off to Sergio holding himself accountable, but I’m not sure about that “many options” thing. Again, there is dubious implication here — that Kuchar should have thrown a hole in the name of competitive integrity. The notion is both amusing and preposterous, not so much a deflection of blame, but a willingness to share it.

McGinley said he gave J.J. Henry a 20-foot putt at the 2006 Ryder Cup after a streaker ran onto the course and stomped through Henry’s putting line. What the Irishman didn’t mention is that his blaring act of sportsmanship occurred in the Sunday singles matches with the Europeans up 13-8 at the time, clobbering the Americans so mercilessly that U.S. skipper Tom Lehman needed to find the nearest hotel and steal a bin of white towels.

It’s easy to be a nice guy once you’ve turned your foe into a punching bag. And it’s just as easy to see how the Garcia-Kuchar flap has raised flags from a nationalistic point of view. Reading the pro-Garcia tweets written and reposted by British golf writer Michael McEwan, it’s no wonder the Euros batter the Yanks in the Ryder Cup. There is passion in the venom fired from the Other Side, and no measure of common sense will alter the perception of many Europeans that Kuchar is a mischievous pariah.

Garcia, of course, is a Ryder Cup hero. A big-game hunter who rubs a lot of people the wrong way, a man whose fiery nature has led to an inferno that has destroyed his public image, in the eyes of many. Sergio does things other Tour pros do not. He says things that teeter on the edge of candor and common sense. He also makes a lot of 15-footers when golf becomes a team game of Us against Them.

Those putts will all be a part of Garcia’s legacy. So will this missed tap-in.