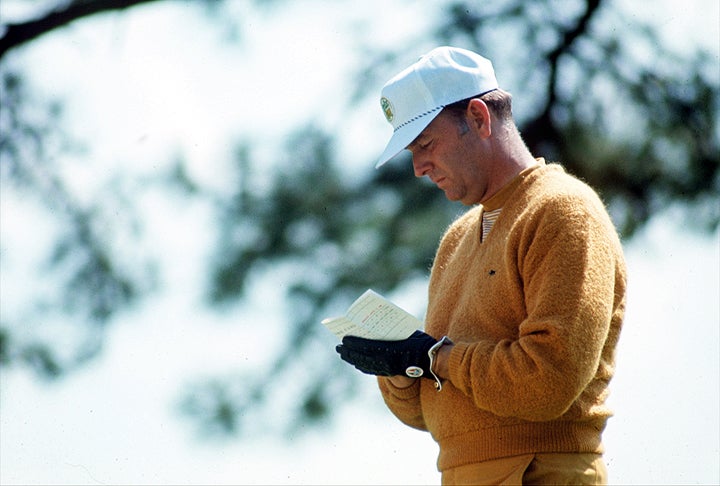 Billy Casper fills out his scorecard during the 1969 Masters. Casper, who won 51 times on the PGA Tour -- including three majors -- died Feb. 7 at age 83.
Eric Schweikardt/SI

Billy Casper, who died on Saturday at 83, was the most underrated Hall of Fame golfer of them all. His outstanding 2012 book, “The Big Three and Me,” could not have had a more fitting title. Casper’s heyday overlapped exactly with the golfing primes of Arnold Palmer, Jack Nicklaus and Gary Player. When the Big Three were winning, Casper was winning, too, just less flamboyantly.

But Casper won 51 times on the PGA Tour between 1956 and 1975, in an era when it was ridiculously crowded with talent and manly men who were not afraid to win. Along the way, Casper won two U.S. Opens, in ’59 and ’66, and the 1970 Masters. He could not have identified his glutes with the help of the surgeon general — Billy Casper was a large and sedentary man — but along with Bobby Locke he was the best “pop” putter who ever lived. 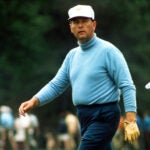 You may also like Billy Casper: A Golfing Life in Pictures

He will be missed throughout golf, a gentle man who welcomed questions on any subject and who never seemed to be in hurry for anything. He will be especially missed at Augusta. During the Masters, he would have long lunches on the upstairs clubhouse veranda, in his green coat — 50L would be a generous guess — surrounded by friends and many family members. Casper and his wife, Shirley, who survives him, had 11 children, six of whom were adopted. Casper was a devout Mormon, a proponent of the health benefits of eating buffalo meat, and a successful businessman. He started a golf-course management company, Billy Casper Golf, that operates well over 100 golf courses.

The most famous win of his storied career came in 1966 at the Olympic Club in San Francisco, where he defeated Arnold Palmer in an 18-hole playoff to win his second U.S. Open title. In the fourth round, Palmer, paired with Casper, had a seven-shot lead with nine holes to play. But Palmer faltered and Casper was steady and at the end of regulation they were tied. On the 18th hole, Palmer asked Casper if he wanted him to mark or putt the short putt he needed to secure a tie. Casper said, “Go ahead, Arnold, you’re hot.”

Casper grew up in a working-class family in San Diego and played with Gene Littler and Mickey Wright, future Hall of Famers, as a kid in the late 1940s and early 1950s. Wright once said that Casper’s short game was so good it would “make Phil Mickelson’s short game look like a child’s.”

Wright shared her reaction to Casper’s death via email on Sunday: “My first thoughts were for Shirley. My heart goes out to her. A wonderful woman. Memories flooded back about the hours spent with Billy on the practice tee and putting green at San Diego Country Club. He was so kind to share his feelings and thoughts about putting with me. He also loved to show off his ‘power-fade.’ He was truly a magnificent golfer and human being. I’m very sad today.”

In his ’59 U.S. Open victory at Winged Foot, competing against Palmer, Ben Hogan, Sam Snead and a roster of superstars, Casper had 31 one-putt greens. On the par-3 third hole, fearful of the bad lies he might get if he missed the green, he laid up in all four rounds and got up-and-down for par each time. He was a golfer who thought for himself, who credits his superior putting to long childhood practice-green putting sessions in which he would putt in the dark. His victory in ’59 earned him $12,000.

In an interview with the Associated Press on Saturday night, Jack Nicklaus said of Casper, “Billy was a fantastic player, and I don’t think he gets enough credit for being one. I have said many times that during my career, when I looked up at a leaderboard, I wasn’t just looking to see where a Palmer or a Player or a Trevino was. I was also checking to see where Billy Casper was. Billy had tremendous confidence. He just believed in himself.”

Casper, a truly respected and beloved figure in the game, had his share of hardship and tragedy. He died of a heart attack but had a long series of health problems and complicated allergy issues going back to the ‘60s. One of his sons, David, is serving a prison term for life for a violent confrontation with police and a long string of felonies. In a remarkable 2005 interview with Golf Digest, Casper said, “The day they took David off to prison, he left through a door with a small window. I remember looking through that little window and waving goodbye. Heartbreaking.”

He also said, “I was 16 when I watched Ben Hogan play an exhibition in San Diego. He became my hero, and I built my career around his course-management principles. Between that and my own ability, I won 51 tournaments on the PGA Tour. I won two U.S. Opens and a Masters, played on eight Ryder Cup teams and captained another. I won the Vardon Trophy five times. If I had never seen Hogan play that exhibition, I might never have amounted to much in golf.”

But he did see Hogan, and he did amount to much in golf. Casper won more than Mickelson, more than Tom Watson, more than Lee Trevino and Ben Crenshaw combined. The only players with more Tour wins are Snead, Tiger Woods, Nicklaus, Hogan, Palmer and Bryon Nelson. Golf lost an icon on Saturday, and he will not be replaced.