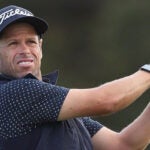 Andrew Martin during the PGA Tour of Australasia’s TPS Sydney.

Andrew Martin hit his chip from just left of the green on the par-5 9th at the Bonnie Doon Golf Club, his ball rolled for about 5 seconds, and it dropped into the front of the cup. Martin somewhat sheepishly scratched his chin, smiled and shook his head. Eagle chip-ins will daze and confuse.

“Here he is, his third shot on the 9th, the par-5, bingo!” the announcer said during Sunday’s final-round coverage of the PGA Tour of Australasia’s TPS Sydney. “His fourth eagle of the round, in nine holes.”

To be even more specific, it was the Australian pro’s fourth eagle in seven holes. Over less than half of his round, Martin was eight under. According to the PGA Tour of Australia, five players have made four eagles in a round on a major tour, and one player (Finland’s Finland’s Toni Hakula at the Abierto de Chile in 2019) has made three straight.

A post shared by PGA Tour of Australasia (@pgatouraus)

Martin, too, was eight strokes out of the lead to start Sunday, then won by two after a 10-under 61.

“It’s still a bit of a whirlwind,” the 36-year-old pro said on the PGA Australia’s website. “To shoot 10 under, that’s still hard to get through my head, but mainly just the support of my family and my wife, Rachel, has given me to be able to keep doing this because it is tough in Australia to make a living here.

“I’ve never really fallen out of love with the game. I’ve always wanted to do it and if I was ever going to stop playing it would be a hard pill to swallow because I still feel there is a lot I want to achieve. This is one little box ticked, but there a couple more I want to do. It’s just good to show that my game is still there.”

A post shared by PGA Tour of Australasia (@pgatouraus)

“I just wanted to shoot a good score to be honest,” Martin said on the PGA Australia’s website. “Try and jump up the leaderboard and four eagles obviously helped that.”