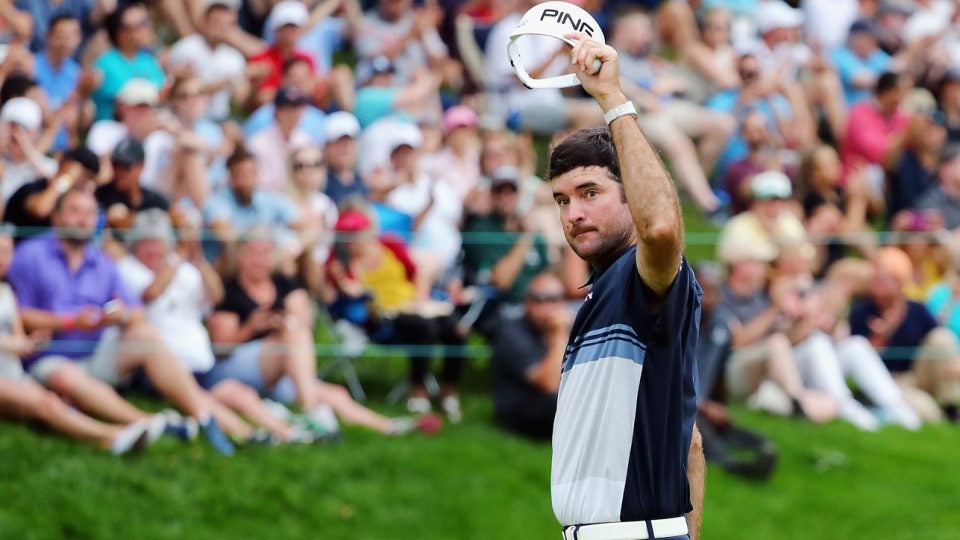 How has Greater Hartford Open become such a big-time tournament? As I ruminate on this question I’m sipping mint tea from a Yetti emblazoned with the tournament logo. I’ve never covered Hartford but every year they send me (and many other scribes) some kind of little gift like this. Given that the tourney comes right after the U.S. Open and is just as my kids are beginning their summer break, I’m not likely to cover it for at least another decade, and yet the gifts arrive every year, like clockwork. I can only imagine how hard the Hartford folks are wooing the players behind the scenes. So when it comes to a tournament’s strength-of-field, sometimes it’s the little things than can have an effect. Now, to this week’s questions…

It’s one of golf’s great mysteries, and it transcends Casey. Why do some gifted players consitently fail to get it done on Sundays, while other less obviously talented players have a knack for closing? No doubt Casey has spent some sleepless nights chewing on this himself. I think the best quote I’ve read about the capriousness of winning came from Arnold Palmer when he was interviewed by, of all people, Charlie Rose:  “Once you vary, and you lose that thing … What is it? Sometimes it’s hard to put in place. What is it? I’m not sure I know. I’m not sure Jack knows. … Can you get it back, can you get that thing you can’t put your finger on and get hold of it and choke it and keep it? Boy, that’s a tough deal. … It could be a psychological thing. You say, ‘Well, I’ve done it.’ Then you say, ‘I want to do it again.’ But it isn’t there. You can’t find it. You can’t grasp it. You can’t hold on to it.”

Can Bubba still win PoY if nobody remembers what he won? – @theAleMarcoli

Well, the L.A. Open and the Match Play are two of the premiere events on Tour, and Hartford had a stacked field and Bubba blitzed them all on Sunday with a stellar 63. The wraparound season is nearly three-quarters over, and if the voting was today Bubba would have to be PoY. Of course, we still have two majors, a WGC and the FedEx Cup coming, so things will surely change. But don’t sleep on Gerry Lester Watson, Jr.

How will Mike Davis screw up Pebble next year? #AskAlan – @PurdueMatt05

I was floating around Pebble Beach a couple of days ago, for the unveiling of the new visitor center, and naturally this very topic came up. The folks there are already nervous, as they should be. In 2010 the USGA pushed the greens to the limit and they were bumpy and discolored and the players rightfully voiced their displeasure. Everyone knows I love Pebble but it is woefully short for the modern professional game. No doubt the USGA will again be tempted to stress the greens to offer some sort of challenge, but the better answer is an old-school penal setup of narrow fairways and long rough. The modern tastes for width and angles is great for everyday players but if Tour pros are allowed to swing away with impunity they will destroy the course, as happened at Erin Hills, which at 7,800 yards is 800 (!) yards longer than Pebble. Shinnecock, with its widended fairways, was also vulnerable — on Sunday, when the greens were brought back from the edge and the wind didn’t blow for much of the day, 63, 65 and 66 all went up on the board. I don’t love hack-out rough but if we’re going to play the national championship on a 7,000-yard course it needs to have some teeth.

Bubba is going to be in Paris. Who pairs with him in team play? His 3-5 record in foursomes/fourball doesn’t inspire confidence. #AskAlan – Amol (@amolyajnik)

He’s 0-2 lifetime in alternate shot so, given Bubba’s idiosyncrasies, it’s safe to assume he won’t be called upon in that quirky format. But he should be a weapon in fourball. Whom his partner is may depend upon Webb Simpson making the team. (He’s 9th right now in the standings.) In 2012, Simpson and Watson won two fourball matches with the blowout score of 5 & 4. (In ’14, in the very first match of the Cup, they got boat-raced by the powerhouse team of Rose/Stenson.) Clearly, Watson needs a steady player and low-key personality to bring stability to the partnership, and Simpson fits the bill. So does Kuchar — he and Bubba lost a tight match to Rose-Stenson in 2014. Given his friendship with Watson, Fowler is also a strong possibility. You know what would be an extremely interesting pairing? Watson-Woods. Bubba has so much reverence for him I think he’d play his ass off, and neo-Tiger would revel in the chance to offer leadership for what could be a powerhouse team.

When is that huge tease that you giddily tweeted about a few weeks ago going to be announced? #AskAlan – Drew (@vikingdrewby)

Hopefully, any day now. I went back to my source right before the U.S. Open and s/he said the negotiations had hit a snag but it had been resolved and an announcement was imminent. Trust me, I’m as eager as all y’all for this to become public!

What is an example of how pace of play is hurting the game? Professional golf seems to be in a great place right now. – Brian (@GolfIsGood)

It’s really about the in-person fan experience. If you’re at a tournament it can be deathly boring when the pace of play slows to a crawl. Television mitigates this by simply cutting away to other action. But even this becomes problematic late on Sunday afternoons, when there are fewer groups to go to — that’s why there was such an outcry over J.B. Holmes’s antics at Torrey Pines, because viewers were forced to live through every excrutiating second.

How would Commissioner Shipnuck deal with slow play? – Paul (@OtownPaul)

First of all, I’d prefer to be addressed as Supreme Leader. The Tour already has slow play rules in place but they’re clearly ineffective, and also confusing and secretive — it involves rules officials timing individual players and offering warnings, all unseen by the public. Let’s make it simple, and exciting: threesomes have four hours to complete a round, twosomes 3:45. For every five minutes over the allotted time, one stroke is added to every player in the group. Imagine if the leader comes to the 18th hole but is at 3:36 for his round — the tension would be fantastic! Once J.B. Holmes starts turning 67s into 73s he’ll get with the program real quick. Peer pressure/public shaming will ensure that.

Does it feel to you that Rory is one putting lesson away from another hot streak? His ball striking has been great this year. – Wes (@small_Due)

My apathy over Koepka’s win at the U.S. Open crystallized as I watched the World Cup. The players live and die with every minute. Koepka (and DJ) don’t. Would Koepka have been distraught if he had lost it? Truly busted up? DJ wasn’t. It’s a good mindset for majors. But rubs me wrong. – @CHFounder

Well, the World Cup is played only once every four years and each player carries the weight of his country on his shoulders, while Koepka plays four majors a year, largely for himself. I’m not sure it’s a fair comparison, but I do get what you’re saying: Koepka has won back-to-back U.S. Opens and in total offered one small fist-pump. If he’s not going to exhibit any excitement about the feat it’s certainly hard for the rest of us to feel it. His post-victory tweets, which were craven nods to his sponsors, also felt hollow and unsatisfying. Not getting too high or too low is a good recipe for long-term success in golf, but it does make it hard for fans to connect with that player.

Who isn’t? That’s about the most fun you can have watching golf alone in the middle of the night. Now, if he proves he has staying power, it’ll be interesting to see how his act continues to be received. Don’t forget, Chi Chi Rodriguez was nicknamed “The Four-Shot Penalty” by his fellow pros, who were distracted by his schtick.

What is the most money you’ve ever spent in a pro shop (can’t include equipment)? Asking for a friend that might have a large credit card bill next month. #AskAlan -@EthanZimman

I don’t know, $50 on a dozen balls? I liked logoed ball markers and logoed hats but that’s about it, which keeps the bill pretty low. What on earth did you buy?

When Tour players, caddies and coaches are throwing childish insults at certain writers on social media when they don’t like something, is it helping or hindering #growingthegame? -Mark (@mocycling)

It was certainly an interesting week on Twitter for yours truly. I’ve come to the melancholy conclusion that it’s not a helpful medium for me. When writing for GOLF or GOLF.com – and before that, SI – I labor over every sentence. I see this journalism as the definitive word on the topic at hand and so I spend a lot of time reflecting and organizing my thoughts. Twitter is a totally different beast, and I used to believe readers understood the difference. To me, Twitter has always been for reacting spontaneously, having fun and engaging in debate. I’m naturally a smart aleck and tend to traffic in hyberbole, which I used to think makes for good tweets. I enjoyed the banter and repartee. But it’s been depressing to realize how many strident point-missers and snowflakes there are amongst us on Golf Twitter. They dish it out but they can’t take it, and if they don’t like a tweet their first inclination is to be grouchy, or insulting, or both. It gets old. As to your question about growing the game, I do think all of these little Twitter dustups reveal something larger about the golf world, which is that it is largely humorless. NBA Twitter is a riot because everyone is on the joke, including the players. It’s all done with a wink, and it’s great theater. No wonder young fans are so engaged. From the outside looking in, Golf Twitter doesn’t look like that much fun, unfortunately. It’s not even that smart, because debate quickly devolves into name-calling. Maybe that’ll change. But with the Ryder Cup on the horizon, I doubt it!