#AskAlan mailbag: Is Phil underappreciated, and who is the best interview on Tour?

Folks, it was a helluva year here at #AskAlan. Thanks for making it fun.
#AskAlan What is the bigger crime against humanity – Dru Love (aspiring Tour pro, a dozen career Tour starts) competing in the Father/Son or Omar Uresti (a PGA Life Member, over 350 career Tour starts) competing as a “club pro”? -@BladyNick
What about John Peterson getting his am status back in 3 years? -@NoCartsPlease
All of the above are abominations, fundamentally altering the playing field in unfair ways. The Peterson thing really bugs me. Amateur status should be like your virginity – once it’s gone, it’s gone forever. To be a pro means devoting countless hours to your game, conferring a lifetime advantage over mere amateurs. Uresti has a similar edge over the poor sweater-folders he’s competing against. And the Dru Love outrage has been so pervasive I don’t have much to add, other than scorn.
Phil has 43 wins, Dustin is at 19 and then it’s down to Rory with 14. Does anyone ever catch Phil’s PGA Tour total in the next decades? Is Phil’s total under appreciated? -Jody (@joelbshaw)
Massively underappreciated! Dustin is the most prolific winner over the last three seasons, with 10 wins. If he has another three-year stretch like that, and then *another*, he’s still four behind Mickelson’s career total, and already in his 40s. Jordan Spieth and Justin Thomas have the best chance, with 11 and 9 wins, respectively, at the age of 25. But they’re facing deeper fields than Phil did, not to mention more 24/7 scrutiny. And they have to stay injury-free, which Mickelson has managed to do for the last three decades. Taken all together, I think Phil’s win total is pretty safe.
I fell in love with Little John’s game this weekend. Discuss. -@BrianvRowe
Yeah, it was a revelation watching him play. Like most golfers, I probably spend too much time worrying about mechanics and being bogged down by swing thoughts. Little John is the antidote to all of that. The freedom with which he plays is truly inspiring.
Looks like Jack can still putt. What would his legitimate handicap be? #AskAlan -John (@jkellegrew)
Put him on 6K yard tees, which makes sense for a man of his age, and he’s scratch … at least if there are cameras and fans around. The Nicklaus kitchen is papered in signed $100 bills he’s taken from his regular playing partners. One of Big Jack’s intimates told me that these days across 18 holes his interest seems to come and go but he *always* birdies the last hole to take the money. How good is that?


Looking for a late Christmas gift: what is the best Jack Nicklaus biography? -Eric (@GolfTrotterQc)
It’s kind of sad that all the Nicklaus autobios are somewhat dry and boring. Arnie & Jack by Ian O’Connor is probably your best bet, since it’s enlivened by the Palmer material. Duel in the Sun by Michael Corcoran is not as expansive but it does a terrific job bringing to life the unforgettable 1977 Open Championship. I also really like Curt Sampson’s The Eternal Summer about the 1960 season – there’s a lot of Hogan and Palmer here but also some fascinating stuff about the young Nicklaus.
All these guys on Tour seem to want to get married by age 25 … usually to girlfriends they’ve had since middle school. Are there any proud cocksmen on Tour or is any action happening on burner phones behind closed doors? -@PaulKoehorst
I agree it’s a troubling trend – these young superstars should be cutting a swath through the Maxim Hot 100! But a few Masters ago I was chatting with a tween golf phenom in Jordan Spieth’s gallery – they share a trainer and Spieth had become a mentor. I asked the kid if Jordan ever offered advice for his love life and he said,”Yeah, he told me to find a good girl and hold on to her – it’s better for your golf.” No doubt skirt-chasing siphons a lot of time and energy that could otherwise be used to accrue FedEx Cup points. Spieth’s words are more than advice – it’s a worldview. And most of his contemporaries have taken it to heart.

In order, Koepka’s power, Spieth’s putter, Tiger’s mind, Reed’s short game, Stenson’s 3-wood, Pepperell’s humour or Rock’s hairdo? -@MarkTownsendNCG
I don’t need Rock’s hair! This is what I crave, in order: Koepka’s long-game, Reed’s short-game, Spieth’s putter, Tiger’s mind (because if I have all of the above, I can remain mentally weak), Stenson’s 3-wood, Pepperell’s wit.
Since repairs will be allowed on greens starting in January, do you think there will be a movement to wear steel spike shoes again? -@TimothyrPope
I doubt it, since most golfers are now used to wearing glorified tennis shoes and they are undeniably more comfortable. But I hope a few die-hards will go back to the nails, if only because the sound of those shoes on hard surfaces is so evocative – I can still hear the stomping of pissed-off Tour pros from the mid-90s as they stormed out of the scoring area and across parking lots. 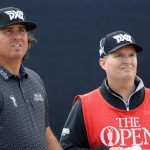 You may also like #AskAlan mailbag: Which player/caddie duo is unbreakable?

I have a theory that many private clubs would not be ranked as highly if they were public access courses. That private factor adds a mystique and prestige that affects the way people think about and rank courses. The forbidden fruit tastes sweeter. Thoughts? -@Ryan (@rstimsonbyu)
Totally agree. In the last week I have played Bel-Air and MPCC Dunes, which is not even really relevant to answering this question but I feel compelled to name-drop because that’s what happens when you sneak onto an exclusive private course. The many times I’ve played CPC or Pine Valley (more name-dropping, sorry, I can’t help myself) I have repeatedly observed the phenomenon you describe, where folks are downright giddy just to be there. So of course they are predisposed to like the course more, since it’s been built-up for years (decades?) in their minds. But unless we let robots and not humans rank golf courses, I’m not sure how to remove this bias from the Top 100 lists.
At which North Carolina course would you like to see a PGA Tour event? Excluding Pinehurst and courses already hosting (Quail, Sedgefield, etc). -@Mason_Herlihy
Tobacco Road!!! I played it for the first time this year and it blew my mind. It might be the most fun/outrageous course I’ve ever seen, just a vast canvas for Mike Strantz to express his artistry. The pros would probably hate it, which is all the more reason to make them play it!
Who is your favorite player to interview? #AskAlan -Matthew (@DKMSKeller)
Geoff Ogilvy, Padraig, Phil, Pat Perez, Rory, Martin Kaymer, Bryson, Tony Finau, Bubba, Keegan Bradley, Sneds, Charles Howell, Stewart Cink, J. Rose, Kevin Na, J. Vegas, Brian Gay, James Hahn.
Is Francesco’s 2-iron at Carnoustie’s 17th hole the shot of the year? -@theAleMarcoli
He hit so many pure shots that week it’s hard to pick just one. Molinari’s finish at Carnoustie – including the gutsy drive and deadly wedge on the 72nd hole – has to be the clutchest golf of the year, but the most memorable shot for me was Justin Thomas holing out his approach on the final hole in Mexico City to force a playoff. That was outrageously dramatic.

Maybe this is only of interest to Bay Area/Monterey Peninsula locals like ourselves, but on a scale of 1 to 10, how big a snafu is the scheduling of the Safeway Open and First Tee Open in the same week? -Gary (@WillotheGlen)
It’s a catastrophe! Neither event pulls in much national media, so local scribes are crucial to spreading the word about what are two sneaky good tournaments. It makes zero sense to split up the already dwindling numbers of those of us who would like to actually cover these things. Two or three dozen VPs in Ponte Vedra Beach should be fired over this.
#AskAlan Tadd Fujikawa, now Mel Reid – kudos to both! But I’m really surprised to hear both of them are struggling to get sponsors. Sponsoring an athlete who comes out feels not only right but isn’t it good business, with so much free exposure? -Oskar (@tallboy199)
I’ve been a huge fan of Tadd’s going back to when he was a teen phenom and I wrote a long profile about him for SI. I hope he can now find the inner peace that has been so elusive, and it will be a bonus if that is reflected in his golf. But companies rarely make decisions based on what’s “right” – it’s much more calculated than that. How much exposure does Tadd really offer, given his lack of status on any pro tour? Mel Reid has had a very nice career on the LET, with six victories, but at 31 she has only one top-10 in a major. Given that far more accomplished players in women’s golf struggle to find corporate support, Reid’s lack of sponsors is more about the sad, systemic undervaluing of women’s sports than any blowback to her coming-out. So, while I appreciate your idealism, I can’t share in it.
What will your 2019 New Year’s Resolution for Golf be? #AskAlan -@ScottyGman23
Play more, tweet less.