‘Are you kidding me?!’: Tiger Woods’s late surge at the Valspar puts athletes, celebs in a frenzy

Tiger Woods finished T2 at the Valspar Championship Sunday, and his late surge injected an incredible amount of excitement into the Florida event.

Starting the day one shot off the lead, Woods grabbed the co-lead on the first hole but dropped back with a bogey on the 4th. Hours later, with Paul Casey in the clubhouse at 10 under, Woods needed a birdie-birdie finish to force a playoff.

Woods drained a 44-foot birdie putt on 17 to get within one — and put the crowd (and social media) in a frenzy — and he gave himself a shot to tie with another long birdie try on 18, but he missed from 39 feet. 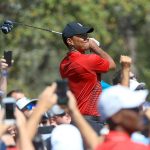 You may also like Tiger Woods didn’t win the Valspar Championship, but he proved once again that this comeback is unlike the rest

Still, his T2 finish was his best since 2013, and Twitter took note of the 14-time major winner’s form. Pros and celebrities alike chimed in. You can check out some of the chatter below.

Are you kidding me @TigerWoods ?!?

@TigerWoods you are ridiculous that putt on 17 wow!

.@TigerWoods from deep! What a putt. So great to see him competing like this on a Sunday.

Tiger woods , I love you

Has any one athlete ever moved the needle for an entire sport like Tiger for golf?! Maybe MJ, Serena… idk. Man that’s crazy.