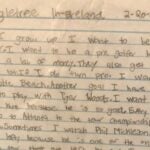 Andy Ogletree was a big fan of Tiger Woods 13 years ago.

It has been quite the November for Andy Ogletree.

The 22-year-old who won the U.S. Amateur last year at Pinehurst finally made good on that victory and played in the Masters last week at Augusta National. It was a dream week, as he would later describe, but the dream was much more than just one year in the making. Actually, Ogletree had been thinking about this week for much of his life.

Andy’s father, Jim, was sitting on some gold from Andy’s upbringing: an essay his son wrote at age 10. In it, Andy laid out goals for himself and described just what he wanted to do when he grew up. Among the targets was 1. becoming a professional golfer and 2. playing with Tiger Woods. As is customary at the Masters, the U.S. Amateur champion plays the first two rounds in a group with the reigning Masters champion, so Andy got his first taste of playing with Woods, and he knew it was coming for about 15 months. It definitely helped that Woods leveled up with him early and made it an enjoyable two rounds for both of them. Ogletree shot 73-70 in the first two rounds and actually clipped Woods by one over the weekend.

The turning pro half of this equation would take place just a couple days later. After Ogletree accepted low amateur honors in Butler Cabin Sunday, he turned professional this week, checking off another box from that 12-year-old letter.

Fittingly, one of the other people mentioned in Ogletree’s 2008 writing was Camilo Villegas. Villegas was ranked 65th in the world then, and much more relevant than he his now, ranked 866th. However, Villegas was feeling himself Thursday at the RSM Classic. The 38-year-old shot a bogey-free 64 at Sea Island en route to a share of the first round lead. Will he be paired up with Ogletree anytime soon? We’ll have to see. For now, we’re just curious if there are any other pieces of predictive writing that Jim Ogletree is sitting on.