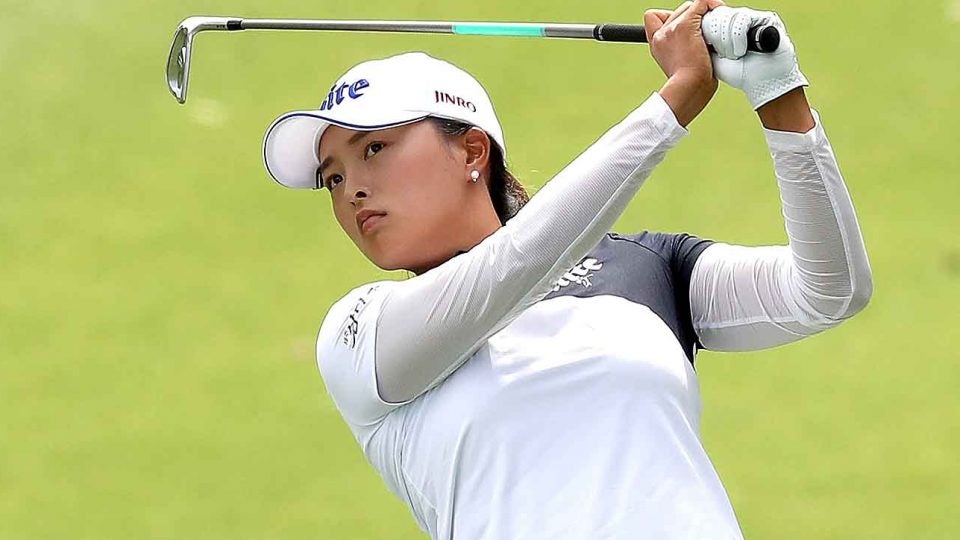 Jin Young Ko will take a one-shot lead into Sunday at the ANA Inspiration.
Getty Images

Three rounds are in the books at the first LPGA major of the year, the ANA Inspiration. Mission Hills is known for its splashy finishes, and the stage is set for another memorable Sunday. Here are four things you need to know for the final round.

One shot turned the tournament

Jin Young Ko, the 2018 LPGA rookie of the year, started her round on fire, ringing up six birdies in 13 holes to surge to a four-shot lead. But everything came crashing down on the shortest hole on the course — the 124-yard 14th. Stunningly, Ko rinsed her tee shot in the front pond and went on to make a double. Still reeling, she bogeyed 15. Ko, who putts with the flagstick in, was able to bounce back with a birdie on 17 and a two-putt par at the par-5 18th for a 68. She’ll sleep on a one-shot lead tonight and chase her first career major on Sunday.

IK Kim held the lead entering the day, but struggled throughout her third round. Still, she’s easy to root for here — who doesn’t love a revenge story? It’s been seven years since she lipped out a 14-inch putt on the 72nd hole to win the event, which would’ve been her first major. (Kim went on to lose in a playoff.) She did pour in a 10-footer for birdie on 18 on Saturday afternoon to ease the sting of a tough day and sign for a 73. She trails Ko by one and will play with her in Sunday’s final pairing.

Shot of the day

Hey, it would fun to make an ace in a major championship, wouldn’t it? Mi Hyang Lee clearly agrees. She jarred her tee shot on the 181-yard par-3 17th with a five-hybrid, and celebrated like many of us would — by pretty much going nuts.

Americans in the mix

Danielle Kang, who won the 2017 Women’s PGA Championship, is in contention for her second career major title. She shot 70 and trails by three. The next-closest Americans are Angel Yin, Jessica Korda, Ally McDonald and Stacy Lewis at two under.