Amy Olson responds to backstopping critics: ‘There was no collusion and no intent’

LPGA star Amy Olson responded to backstopping critics Sunday evening in a post on social media, defending her actions after two days she described as “some of the hardest I’ve ever had to go through.”

Olson’s post reasserted her statements that there was “no collusion and no intent” in the incident, which took place Friday at the Honda LPGA Thailand. The criticism came after a clip posted to Twitter showed Ariya Jutanugarn chip her ball near the hole and then leave it there, where it ultimately served as a convenient backstop for Olson’s chip. After her ball hit Jutanugarn’s, the two players shared a light-hearted moment that included a fist-bump, raising the ire of some commentators as celebrating a rules violation. Olson insists that wasn’t the case.

Even worse with the full video pic.twitter.com/lpras0mF4L

“First of all, I’m all for a healthy discussion of whether “backstopping” should be expanded beyond what is currently written in the rules,” she wrote in her statement. “The situation on Friday was innocent. There was no collusion and no intent on either of our parts for me to gain an advantage. The fact that Ariya gave me a fist bump shows that she’s a classy individual who celebrates other people’s success – just like she did earlier that day on hole 10 when I made an eagle and she routinely does with anyone she’s playing with. However, we are competitors and anyone who used the word “cheater” to apply to Ariya or me should be held accountable for their words. While I care about my own reputation I find it even more important to clear Ariya who has the highest integrity of anyone on tour. Period.

“To those who have presumed to know our intent and accused us from behind their computer or phone screen, remember that we are real people with reputations, character, and values we live out daily. The things that have been said have been extremely hurtful and have made the past two days some of the hardest I’ve ever had to go through.
Thank you to the many people in the media, on the LPGA, and those who know me personally who were quick to come to my defense. Your support means more than you know. ❤️”

The LPGA had already exonerated the two players of any wrongdoing in a statement it issued Friday evening, citing “no agreement” between the two players to leave the ball in place.

Our statement regarding Amy Olson at the Honda LPGA Thailand: pic.twitter.com/T1Lpavk4RS

Still, the incident has drawn increased scrutiny to Rule 15.3a, which states: “If two or more players agree to leave a ball in place to help any player, and that player then makes a stroke with the helping ball left in place, each player who made the agreement gets the general penalty (two penalty strokes).”

Olson went on to finish the week T23, while Jutanugarn ended up in 14th. Amy Yang closed with a 65 to lift the trophy. 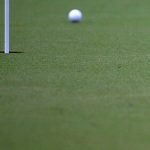 You may also like Tour Confidential: Is backstopping on the pro tours under-policed?