Down but not out: Americans stave off disaster with late rally at Presidents Cup 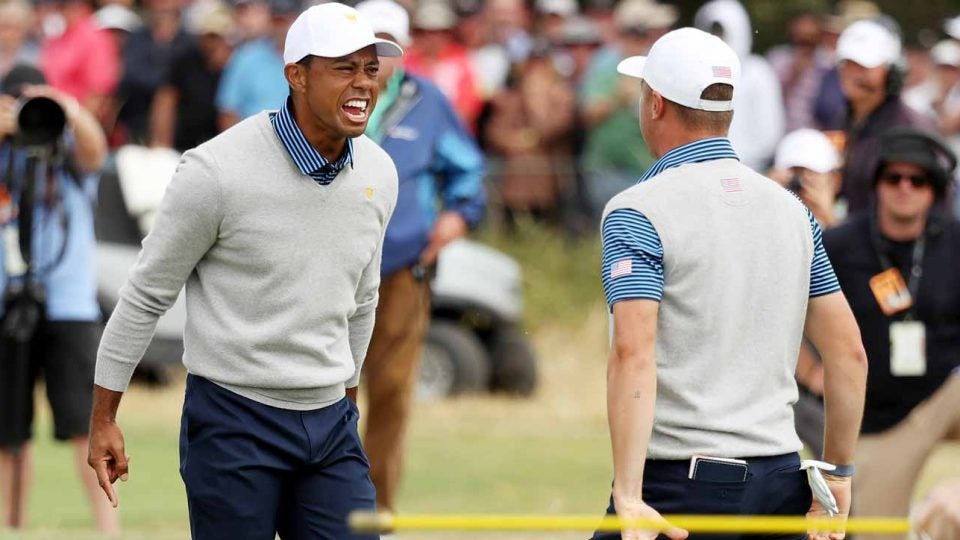 Tiger Woods and Justin Thomas are 2-0 through two sessions at the Presidents Cup.
Getty Images

For a while, the enduring image of Friday’s second session at the Presidents Cup, the enduring image of the entire Cup, period, came courtesy of Patrick Reed. At No. 11, one fan yelled “miss it” while Reed poured in a birdie putt. Reed turned, shushed the crowd and mimicked a shoveling motion, two digs’ worth.

This wasn’t the exuberant shushing of the iconic 2016 Reed-Rory Ryder Cup match. This was a frustrated golfer sick of taking heat from the crowd, sick of getting called a cheater, sick of losing golf holes. But his reaction — and the horrific miss he made with his very next swing — dug the metaphorical hole even deeper.

For a while, it was hard to imagine a better start for the International team, or a worse one for the Americans. The Internationals hadn’t led after any session since 2005 before their surprising 4-1 opener on Thursday. On Friday, they looked even more dominant, holding the lead in all five matches at one point. But a late stand by the U.S. side led to a 2.5-2.5 split, highlighted by match-winning birdie putts from Justin Thomas and Patrick Cantlay. Those replaced Reed as the enduring images, even though the Internationals lead 6.5-3.5 heading to the weekend.

Dustin Johnson and Matt Kuchar led the Americans in the first match of the day and jumped out to a 2-up lead over Louis Oosthuizen and Adam Scott. But the International veterans came alive. Through seven holes, they were 2 down; by 14 they’d flipped that to a 3-up lead and went on to close out the Americans 3 and 2.

The most lopsided match of the day was Reed and Webb Simpson taking on Abraham Ancer and Marc Leishman. After the Americans went 1-up with a birdie at No. 1, Leishman and Ancer birdied 6 of the next 10 holes, built their lead to 4-up and closed out another 3-and-2 win.

But the Americans found some hope in the battle waged in the second match between Xander Schauffele and Patrick Cantlay versus Adam Hadwin and Joaquin Niemann. Neither side ever went more than 1-up, but when Hadwin poured in a five-footer for birdie at No. 14, the International team held the lead in all five matches.

Still, the Americans got back to tied the very next hole and held steady until the 18th hole. After Niemann’s birdie putt slid by, Cantlay had one final chance and took advantage, burying his birdie putt and walking it in with a fist-pump, clearly well-aware how sorely that full point was needed.

Two matches remained on the course. Tiger Woods/Justin Thomas were knotted with Hideki Matsuyama/Byeong Hun An heading to 18. Woods flagged his second right over the pin, setting up the same putt Cantlay had just buried. As Thomas’ putt trickled down the slope toward the hole, he stared it down all the way until it dropped into the front edge. Thomas dropped his putter and unleashed a scream as he embraced his captain, celebrating the pair’s second point of the week (the third for the American side).

In the final match of the day, Rickie Fowler and Gary Woodland clawed their way back into a tight match. After trailing to Cameron Smith and Sungjae Im for the first 16 holes of the match, American birdies at 15-16-17 set up another match all square headed to No. 18.

Heading to Saturday’s double session, both teams have something positive to draw on. The U.S. side can take solace in their late charge and the fact that they’re still in this thing. The International team has something far more tangible: a three-point advantage.