Here’s why a lively group of Australian fans is cheering for the U.S. at the Presidents Cup 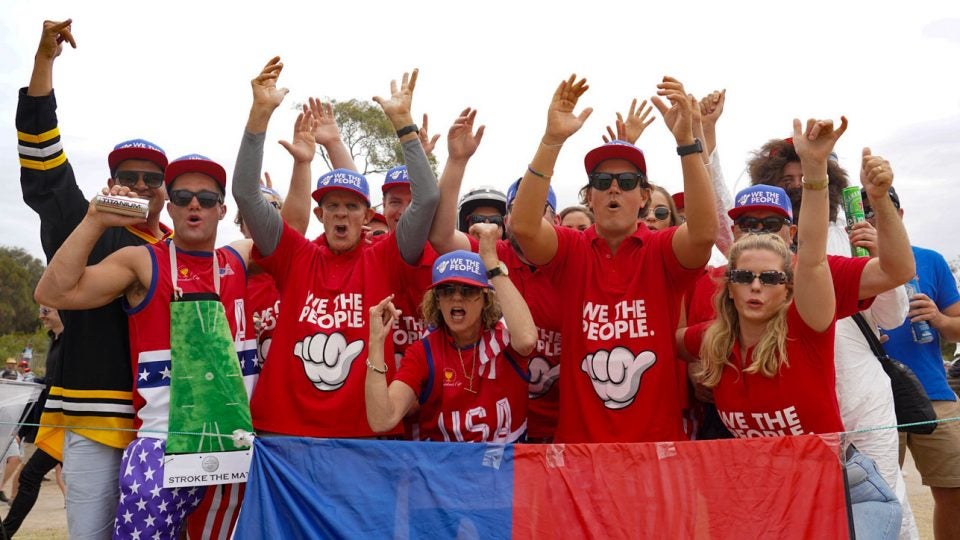 The company "We the People" is out in full force supporting the Americans at Royal Melbourne.
Evin Priest

MELBOURNE, Australia — Among the burning questions at Royal Melbourne this week: Can the Internationals hang on, will Patrick Reed get shut-out and why are the most visible group of pro-American fans cheering and chanting with decidedly un-American accents? Let us examine the last of these matters, because this boisterous, stars-and-stripes wearing bunch has left many at the course — media included — puzzled by the notion of a non-American U.S. support system entrenched in Aussieland.

On Thursday, Barstool Sports quizzed the group on U.S. history. They failed miserably, which led golf fans on social media to question (and ridicule) the group’s raison d’etre. Why were they here? Were they hired guns? Had the PGA Tour paid them to counter the pro-Australian fan group, the Fanatics, and inject some manufactured energy into the event? Speculation ran wild.

Turns out, the fans themselves are actually paying for the privilege of rooting on the Americans, as participants in an experience organized by a tour company called We the People.

The company was founded in 2017 by Australian sports fan, Gareth Fletcher, who has a background in sports tours and event management. The group has strong ties to tennis, supporting the Australian team at Davis Cups, and also has a charitable mission; it has arranged for sick children to meet their sporting idols, working with Australian children’s family cancer charities to make such meetings happen.

This isn’t We the People’s first Presidents Cup — they also had a presence at the previous edition, at Liberty National in New Jersey. The company is already selling three- and six-day tours to the 2020 Ryder Cup at Whistling Straits. According to the organization’s website, participants will receive a supporter’s hat and shirt, a tattoo and chant sheet and a “once in a lifetime experience in interacting, cheering for & motivating Team USA’s best golfers.” The cost of the tours is not listed.

“If you’re lucky enough to be on the grounds with We The People,” the site says, “you will feel the energy running through your body.”

The PGA Tour welcomes these organized fan groups, viewing them as a way to grow and diversify their audience.

“To say that we paid people to dress up as or pretend to be American is simply ill-informed,” Presidents Cup tournament director Matt Kamienski told GOLF.com in a statement.

“We develop marketing relationships with partners and groups that can help us reach and entertain new fans. We have done so with the Fanatics and We the People for many years and believe these partnerships, along with all of the other relationships both traditional and unconventional, are key factors in generating attendance, interest and engagement in this year’s Presidents Cup, both in advance and during the event. The fact that we are seeing tremendous on-site attendance, ticket sales and engagement speaks to the success of this aspect of our broader approach.” 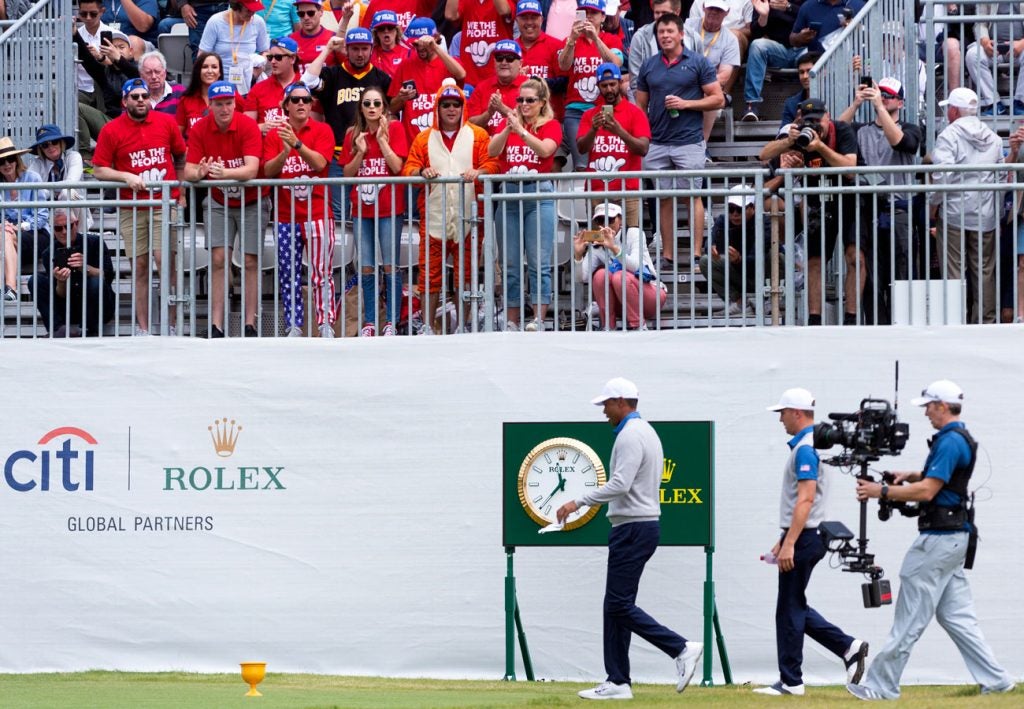 The folks from We the People have stayed very close to the action all week.
Getty Images

You can understand why some observers might bristle watching Australians — a deeply patriotic bunch — dress up and cheer for another nation. But Fletcher, the tour group’s founder, says the notion that sports fans can’t support another nation is narrow-minded. He added that there also are six Americans in his tour group this week.

“I’m not sure what all the negativity was about online,” Fletcher told GOLF.com at Royal Melbourne on Friday. “We just want to come out to sporting events and cheer on the athletes. The Presidents Cup is a big event with players and fans from all around the world.

“The Internationals aren’t an Australian-only team, so cheering for them you’re also cheering for other countries, which we enjoy. The Presidents Cup unites people of all nationalities and we don’t see anything wrong with it.”

At the Tour’s request, Australian professional golfer, Jack Wilson, joined We the People and the Fanatics in the first tee grandstands Friday. Wilson and his caddie, “Rizz” O’Neill, have developed an online following in Australia for a relaxed and humorous approach to golf. Wilson said the Tour asked him if he would create some video content with the two fan groups.

“They were just happy to be a part of it,” Wilson said. “It gave them an opportunity to sit in a position that could allow them to get their chants across.”

It was all good fun until Wilson lost a rock-paper-scissors bet with O’Neill. His payment? Wear the red, white and blue and chant against his International team — no small task for a devout Aussie supporter. Back in 2013, Wilson dueled Adam Scott in the final round of the Australian PGA Championship. On Friday, with Scott making an International record ninth Cup appearance, Wilson’s We the People moment had become a bit too real.

“When they started hanging it on the Aussie boys, that was tough,” Wilson said, using the Australian term for needling. “It was tough being dressed from head to toe in an American flag.

“I was feeling uncomfortable, looking at Scotty. … But it was a lot of fun today.”