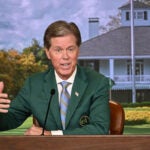 AUGUSTA, Ga. — One day, not long ago, Fred Ridley and his wife, Betsy, showed up in an SUV at the First Tee of Tampa Bay and started unloading boxes of U.S. Open and Augusta National windbreakers, along with scores of drivers and hybrids and putters. Ridley is the chairman of the Augusta National Golf Club. He’s a former president of the USGA. He won the 1975 U.S. Amateur. There’s nobody in golf with a resume quite like his. But that’s not why a few kids hanging around the very public Rogers Park Golf Course that day made a beeline for Ridley’s vehicle. No. What they wanted was first dibs on the good stuff.

When Jim Dent heard about Ridley’s largesse, he wasn’t surprised. Dent grew up in Augusta and caddied at Augusta National as a kid. He had a long career on the Tour and the senior tour. He’s lived for years in Tampa. One of his sons, Joseph, is a caddie at Augusta National today. Ridley grew up in central Florida, went to the University of Florida and is a Tampa lawyer today.

“Fred’s a hell of a golfer and a good man,” Dent said on Wednesday afternoon. This was a few hours after Ridley announced a major program by which Augusta National, with three corporate sponsors, is pledging $10 million in an effort to bring new life — economic, educational and medical — to two Augusta neighborhoods that are in the grip of poverty, one called Harrisburg, the other called Laney Walker. Dent knows the neighborhoods well.

“I grew up in Sand Hills,” Dent said. “Lot of the caddies at the National and the Country Club grew up there, ‘cause we could walk to the courses. But we’d go to Harrisburg because they had the best Waffle House there, the best hamburger in town. I went to school in Laney.”

“Harrisburg was tough; you had to mind your P’s and Q’s,” he said. “You went there, got what you wanted and got out. But it wasn’t nothing like it is today, because there were three mills that were open. There was Claussen’s Bakery. So there were jobs. But by the mid-1970s, those jobs were gone.”.

Ridley, in his annual State of the Masters remarks late Wednesday morning, was saying things that no chairman of Augusta National has ever said before.

You might be tempted to say this was another example of a rich and connected white guy, in his club coat and his cufflinks, doing and saying all the right things in the name of noblesse oblige and good marketing. It’s not. Augusta National is something like every major university — and every major hospital, for that matter — in dozens of cities across America. Town needs gown, and gown needs town. The club depends on hundreds of hourly wage workers — people working on the grounds crew, in the kitchen, as housekeepers, in security — to keep the whole thing going.

Ridley talked about the “unrest that we have witnessed throughout our country.”

He talked about the national conversation “regarding race, equality and opportunity.”

“Although we strive to meet our duty and obligation to give back to the community that has given us so much,” he said, “the past six months prompted us to reflect and ask ourselves the question: What more can we do to move our city forward?”

Dent would never use that kind of language. He’s a golf pro, not a lawyer. But as Augusta National has a philanthropic bent, he does, too. Dent and his wife, Willye, have adopted children, and Dent has given both his money and his time to helping needy kids find their way to golf and stay in it. He bought a house on the outskirts of Augusta and allowed a pioneering Black touring pro, Pete Brown, to live there when he was old and infirm.

“When I was caddying at Augusta as a kid, there was no money, and nobody would ever have thought to do something like what the club is doing now,” Dent said. When he was a kid, Cliff Roberts was the club’s chairman, and Bobby Jones was the club president. “People didn’t look at things like they do today.”

He talked about how the Augusta National caddie yard was all Black, in his day, and how it’s “90 percent white today.” He’s not sure if that represents progress or not, but it does represent change. And now change is coming, he hopes and Augusta National hopes, to these two old, tired neighborhoods.

Augusta National does things with a long-term view. A good guess is that in the next decade, the club and its corporate sponsors — and taxpayers — will pour hundreds of millions of dollars into those neighborhoods, and by 2030, they will look nothing like they do now. One of the first priorities is a reworked Boys & Girls Club.

An artist’s rendering of what it could look like flashed on a screen while Ridley was talking, with a tall Black boy and a tall white girl walking out of its front door.