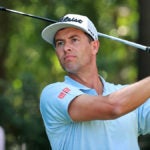 Adam Scott says he doesn't plan to return to the PGA Tour until at least the end of July.

A former world No. 1-ranked player, winner of 31 international tournaments and former Masters champion says he feels unsafe returning to the PGA Tour.

Citing concerns with the Tour’s Health and Safety Plan for the coronavirus, Adam Scott said Thursday he plans to skip the first seven tournaments when play resumes in mid-June and return a week before the rescheduled PGA Championship in early August.

“They are being fairly thorough, but my initial reaction was I was surprised it wasn’t tighter than it is,” Scott told the Associated Press of the Tour’s plan.

Scott said he was concerned over both the Tour’s coronavirus testing plan and the protocol should there be a positive test.

Should a player test positive, that player is immediately escorted off site, withdrawn from the event, given a last-place payout and will have to quarantine a minimum of 10 days.

“What concerns me is dialogue that (the Tour) is hopeful of returning one or two-hour test (results). You’d want that in place before competing,” Scott told the AP.

“The other (concern) is it seems an asymptomatic person could operate within a tournament. If they’re not showing symptoms and I somehow picked it up inside the course and I’m disqualified, I’m now self-isolating (in that city) for two weeks. I’d be annoyed if that happened. I thought you’d start quite tight and loosen those protocols to normal if appropriate.”

Scott is not the only international player who will not return when the Tour begins play on June 11 in Fort Worth, Texas. Lee Westwood, Tommy Fleetwood and Eddie Pepperell have all told various outlets recently that they would not leave Europe, as they currently would have to quarantine for two weeks upon arriving in the U.S., then quarantine for two weeks again upon returning.

When the PGA Tour halted play in mid-March after the first round of the Players Championship, Scott returned home to Queensland, Australia. He’s now prepared to stay there through potentially July 30, when the World Golf Championships-FedEx St. Jude Invitational begins, then remain in the U.S. to play in both the Aug. 6-9 PGA Championship and the Sept. 17-20 U.S. Open.

“I’m definitely going to sit out and see how the first few weeks of the PGA Tour pan out, and if things are progressing well, playing Memphis the week before the PGA is a thought,” Scott told the AP.

“I would have to think about staying in the United States through the U.S. Open. It’s going to turn into like a nine-week trip to do that, maybe more.”