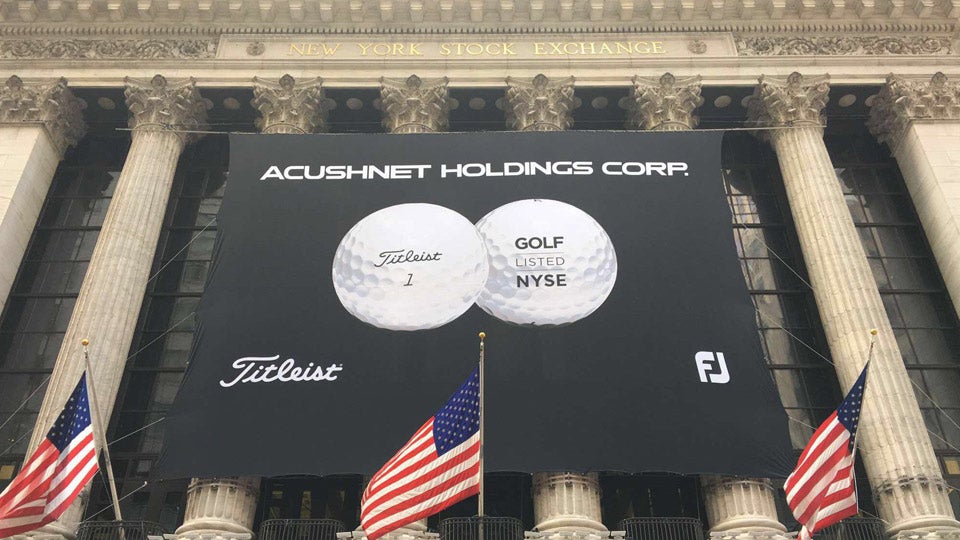 Acushnet Holdings raised $329 million in an initial public offering of 19.3 million shares at $17 each.
Sean Steinemann

The symbol “GOLF” showed up on the New York Stock Exchange on Friday when the parent company of Titleist went public.

Acushnet Holdings, the century-old company in Fairhaven, Massachusetts, that makes the top-selling Titleist golf ball and a full line of golf equipment, raised $329 million in an initial public offering of 19.3 million shares at $17.

One function of the IPO was an exit strategy for some of the investors. Fortune Brands sold Acushnet in 2011 for $1.23 billion to Fila Korea Ltd. and financial investors, primarily Korea-based Mirae Asset Private Equity. Fila Korea now owns 53 percent after Friday’s offering.

Titleist listed $1.5 billion in sales in its federal filing, making it the largest golf equipment company.

“From a running the business point of view, I think the outcome results in greater stability within the capital structure,” Acushnet CEO Wally Uihlein said. “Much like 2011, there will be no change in how we behave in the marketplace. … We’re happy with the way it turned out.”

The IPO comes at a potentially volatile time for the golf industry, which has been coping with a decline in participation over the last decade.

Nike announced in August it was getting out of the golf equipment business, instead focusing on its longtime strength of apparel. Adidas is in the process of selling off its golf properties, the largest of which is TaylorMade.

“You can’t be in denial that the industry was overbuilt,” Uihlein said, referring to such things as a glut of golf courses and expectations that the television viewers Tiger Woods attracted would all want to play regularly. “That needed a reality check, and coming out the industry was less than it was going in.”

He said Acushnet would be helped by its stability and history of serving serious players with brands such as Titleist, Foot-Joy shoes and gloves, Scotty Cameron putters and Vokey wedges. Titleist has been the leading golf ball for more than 50 years and is best known since 2000 for its Pro V1.

According to a report by Renaissance Capital Research, the lower pricing of the IPO showed concerns about the overall golf industry. It said Acushnet still had a four-year compound annual growth rate of 6 percent and expected it would benefit if the market recovers. The report also said Acushnet would benefit from increased sales in Japan and Korea.

Uihlein said if the average golfer spends $1,200 a year on golf equipment, “it’s double that” in Japan and Korea.

“Those markets are premium and we want to grow our position in those markets,” he said.