A Reason to Believe: Over four difficult rounds at PGA National, Tiger Woods did much to silence his doubters

PALM BEACH GARDENS, Fla. — Tiger Woods has been born again! There were many witnesses to this meaningful sporting development, which unfolded during the sun-drenched playing of the Honda Classic, with particular emphasis on his Sunday play. There were ten of thousands of fans lining the back-nine fairways for the finale and millions more watching on TV.

And then there was the man who designed the windswept humorless Champions course at PGA National, Jack Nicklaus, in a coat and tie, hovering above it all, watching from a CBS broadcast booth, maybe 40 feet above the 18th green. How fitting. Big Jack is the man Woods has been chasing for 25 years now.

Excuse our breathlessness, but over these four days we became believers. Woods did not get lucky, to play four rounds in 280 strokes, even par, good for a 12th-place finish. He showed, for the first time since his complex back surgery last April, in which one disk was removed, that he is capable of playing the kind of golf that wins PGA Tour events. There was little sign of that at Torrey Pines last month. There was no sign of that at Riviera last week. But at Honda, you could see it plain as day. Woods would not agree with this assessment. Asked if his four good rounds at a course that’s about 20 miles from his home was a significant step in his comeback, Woods said, “Same as Torrey, same as L.A., same as here — I’m building toward April.” That is, the Masters, which begins April 5. Woods has 14 professional majors. Only one player has more, and you know who that is: J.W. Nicklaus, with 18.

And it’s worth noting that Nicklaus, too, did not need Woods’s Honda play to be convinced that he could play winning golf again. A couple of weeks ago, Nicklaus predicted to me that Woods would return to the winner’s circle, and not just at ordinary Tour events. He was talking about Woods winning majors.

Sayeth G-Bear: “His best chances would be at Augusta, followed by the British Open, if he stays healthy. Augusta has all the room in the world to hit it. When he doesn’t, he knows how to get out of trouble. He could win any tournament. He’s a phenomenal golfer and a phenomenal athlete. Whether he can solve the problem between his ears, which I think is where his biggest problem will be, that’s to be seen. He’s fully capable of winning two more majors — if he stays healthy. Winning five more is another question.”

Nicklaus said those words two days after the Super Bowl. This sight-challenged reporter couldn’t see it then. But in the glow of February’s final Sunday, he could.

I once was lost,
but now am found.
T’was blind
but now I see.

Woods has now played in 331 Tour events. He won 79 of them. All that is prologue. The 2018 Honda Classic, at which Woods earned $151,800, was the first tournament of the rest of his life. To borrow a phrase that just seems fully apt here, Woods is an athlete in recovery in every sense of the word. Recoveries come in steps. Yes, he needed Torrey and L.A. to get where he was this week. But this week he showed that he can play a hard course well.

Nobody keeps score this way in Tour events, but in an examination of Woods, this is meaningful. He went 5-1 at Honda. After Thursday, Friday and Saturday, he was 5-0. Woods shot 70 in the first round, when his playing partners, Patton Kizzire and Brandt Snedeker, each shot 74. The next day, Woods shot 71 to Kizzire’s 78 and Snedeker’s 73. In a twosome on Saturday, Woods shot 69 and Jason Dufner 70. This is what Tiger has always done, as a starting point. Beat his playing partners. Talk about your paths to the trophy presentation — it’s a good one. But then came his Sunday playing partner, 21-year-old Sam Burns, who shot a Sunday 68 to Tiger’s 70.

Tiger likes beating people. That’s his jam. Back in the day, Woods would have been downright pissed, coming home in 37 (with a rinse on 15 and a three-putt on 16), getting beat. But he wasn’t. He was ebullient.

That’s because he played a hard course well for four days with no signs of pain. Now he has to stay pain-free. If he plays 75 Tour events in the next five years, he’s likely to win a few of them. If he plays 20 majors between now and the 2022 British Open, he could see his major total — which has been stuck at 14 for a nearly a decade — go north. Many ifs. But you can see a second act here. We like second acts, second chances, redemption stories, happy endings. The prospect of what is possible here is astounding.
His 12th place at Honda was his best finish in a PGA Tour event since his T-10 at the Wyndham Championship in August 2015.

Woods is almost bulky with muscle, but not the way he was a decade ago. Then, he had the waist of a skinny high-school kid and the upper body of the Michelin Man. Now, his upper legs, his glutes — his whole backside, really — looks thick with muscle, almost like Nicklaus looked like when he won the Masters in 1986 at 46.

With his irons, Woods’s address position, his backswing, his downswing — it all looks like a picture. After impact, on some of his swings, he does some funky and uncharacteristic things. That is particularly true with the driver. Sometimes the right elbow comes flying high, a la Arnold Palmer. Sometimes his finishes leave him off balance. 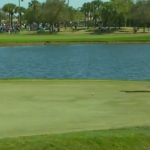 You may also like WATCH: Tiger Woods opens with birdie bomb in final round of Honda Classic

He’s clearly trying to different things with different shots, as a world-class player will do, particularly when playing in the wind. That was especially evident Sunday at the Honda. He wasn’t playing safe shots. He was playing what the British like to call “proper golf.” Cuts, draws, high shots, low shots, not pulling them all off but a good number of them.

PGA National is unforgiving and Woods is not yet firing on all cylinders. But he’s on a path. At Honda, he swung hard for five straight days, including the Wednesday pro-am, including his shots from the rough, his shots over trees, his practice shots on the driving range, his tee shots with driver in hand. That’s how Woods plays. He swings hard. If he can play to 47, it would be a feat.

There was something gentle about Woods, as he concluded his Sunday round with a talented player half his age, as he acknowledged the fans in the stands around the 18th green who are fellow citizens of South Florida, as he talked to reporters. Maybe, after the various agonies he has endured — in his athletic life, his family life, his dating life, his legal life, his health life — he has become more aware of how frail it all is.

Speaking of young Sam Burns, Woods said, “He played beautifully. Top 10 is big for him because it gets him into Tampa. He’s trying to build momentum and build his exempt status. Today and this week was a big step for him.” How beautiful, for Woods to recognize all that, to see a life beyond his own life. There have been many, many times that Woods has been the picture of self-absorption.

“I know it’s been a long time, but I remember how to do this,” he said. What a poignant thing to say.

Sports in general and golf in particular give a person a rich, beautiful opportunity to seize not just the day, but a very specific moment of the day, which could be called now. What you sensed from Woods over the four days of this Honda golf tournament was a certain pleasure of being over a golf ball and trying to get it to follow basic instructions. Yes, he threw clubs and spat and muttered profane words when he could not make the ball do what he wanted it to do. But then there was the next shot, the next Tour event, the next major. Man, alive, does it feel good to be absorbed in something. Tiger Woods didn’t have to say that Sunday night. He showed it over the course of four days and 280 strokes. It was the best 12th-place finish of his life.