Shane Lowry is your Champion Golfer of the Year at Royal Portrush after a final-round 72. His six-shot win is the largest at the Open Championship since Louis Oosthuizen won by seven in 2010.

Lowry, an Irishman, was the crowd favorite all weekend in Northern Ireland. He was greeted with a ceremonial walk up to the 18th that he’ll surely never forget.  Here are nine things you may not have known about the new major champion.

1. Lowry won the Irish Open as an Amateur

At just 22 years old, Lowry took his national Open as an amateur in 2009, and was unable to claim a winner’s check from it. He turned pro a week later and never regretted it.

2. His mother made great money on that win

What a story from Dan Hicks: Before the 2009 Irish Open, when Shane Lowry was still an amateur, his mother Bridget wagered 50 euros on him at 250-1. His win helped pay off their rental house for the week — and presumably a whole lot more.

Lowry was in this position before. At the 2016 U.S. Open, Lowry led the field by four through 54 rainy holes, but he slogged to a finishing 76 at Oakmont. He learned a lot from that crushing defeat, though. “Golf is a strange game, because after finishing second in one of the biggest tournaments in the world, you have such disappointment,” Lowry said. “It’s weird. But there are so many positives to take from the U.S. Open. I think that, going forward, I’ll be able to look back on it as a week that stood out, that helped me. When I put myself in that position next time, I’ll be okay.” Yes, he was.

4. He got married the day after his first Masters

Lowry played the Masters for the first time in 2016. After making the cut and finishing tied for 39th, he and his wife-to-be, Wendy Honner, flew up to New York City and booked a hotel. Then next morning, they journeyed down to City Hall and got hitched. They celebrated with their fair share of pints at Irish pubs in NYC.

5. His father was a great Gaelic footballer

Lowry’s dad, Brendan, was a highly regarded Gaelic football player in Offaly County, Ireland. Shane played some football growing up, but soon enough found his footing in golf. “Ever since I was 14 or 15, it was always golf,” Lowry said.

6. He has a daughter named Iris

She’s is still a toddler, but Iris greeted her father on the 18th green in Abu Dhabi earlier this year. She was there again on Sunday at Portrush, carried onto the final green by Wendy just moments after his final putt. “That means everything, doesn’t it,” he said afterward. “To have her there winning, it’s obviously very special.” 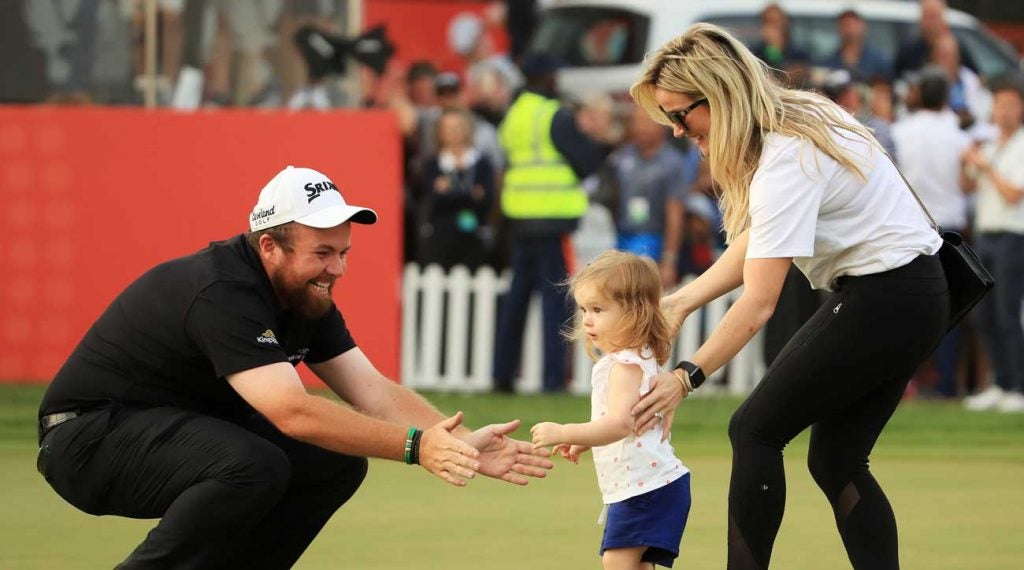 7. He was at his lowest point one year ago

Lowry parted ways with his longtime caddie at Carnoustie last year. He missed the cut and was not enjoying the game of golf. “I cried. Golf wasn’t my friend at the time,” Lowry recalled after winning Sunday. “Look what difference a year makes.” You could say that again.

8. He’s never been outside the top 300 in the world ranking

Lowry’s Irish Open win was his debut in the world ranking. Since it was significant enough of a tournament, Lowry jumped all the way up to No. 168. His career best is 17th, which he reached for the second time after Sunday’s win.

Despite his dominant win this week, Lowry still has a lot of work to do to qualify for the 2020 Ryder Cup team, captained by his good friend Padraig Harrington. The qualification period for the European team begins in two months at the BMW PGA Championship. He’s got his eye on making that squad. Sentimentally, at least, he’s in the right spot.