The seven best things in golf this week, including Pat Perez’s locker at Liberty National

Every week (pretty much) GOLF senior writer Michael Bamberger identifies — and ranks — the absolute, undeniably, very best* things in golf right now. This week, he’s filing from the shadows of Lady Liberty her own self. *or at least mildly interesting.

7. The Greatest of All-Time

A fan asked Tiger to identify his favorite athlete growing up. It was a GOLFTV enterprise, with Tiger and Joe LaCava sitting side-by-side on a warm Tuesday afternoon outside the space-age Liberty National clubhouse, reading questions to one another. Tiger said, “My favorite athlete growing up was probably Muhammad Ali. He was the most recognized figure when I was growing up. I was an LA kid, so Magic Johnson, in Showtime with the Lakers, was big. But Ali was Ali.” It’s an incredible answer, really. Tiger was born near the end of 1975. His boxing career was pretty much over by ’75 and completely over by ’80. So Tiger wasn’t talking about Ali the boxer. He was talking about Ali the man. Ali the man was, as he told the world over and over, the prettiest, smartest, fastest and greatest of all-time. He was also, in his way, the most political athlete of all-time. And the man who turned all-time into one word. Earl Woods could talk about Ali all day and into the night.

Harold Varner played a practice round with Woods on Tuesday afternoon, with Dustin Johnson and Brooks Koepka. One of Varner’s practices is to ask an insightful question to any person he is with, “and try to learn something.” Over their nine holes together, Varner said he had about “30 questions for TDub.” Varner was asked what was the best of them and this is what he said: “What are you doing for dinner?”

The players—the players and their pro-am partners—were pulled off the course early Wednesday afternoon when a storm came in. The smallish men’s locker room at Liberty National became overwhelmed with players, agents, swing coaches and assorted others. Business was booming for a well-dressed man in the locker room with swatches of a thousand fine woolens at his fingertips. A bespoke haberdasher. Who would have thought the PGA Tour would even support such a person in this day and age? And there he was. Sean Foley, Justin Rose’s longtime teacher, fingered various fabrics and said, “This is going to be the most expensive rain-delay ever.”

Ask any workingman Tour player to identify the most important number in golf, and there is only one answer: 125. If you’re No. 125 or higher on the FedEx rankings at the end of a regular season, you have full playing privileges for the following season. Plus, you’re in the FedEx playoffs. This year’s No. 125 was the inimitable Pat Perez and this was greeted him at his Liberty National locker. 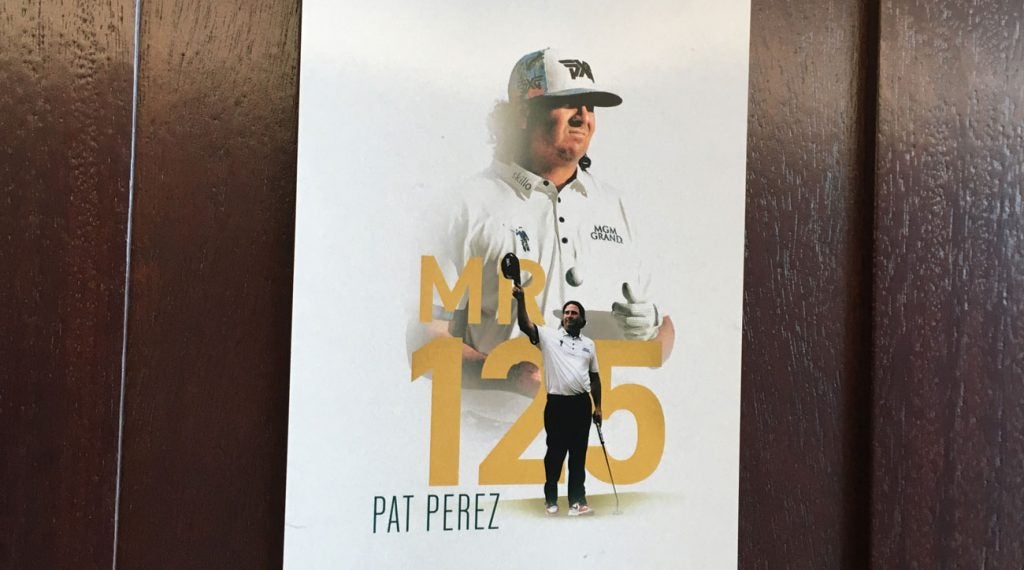 Pat Perez was greeted by a funny sign when he arrived to his locker at Liberty National this week.
Michael Bamberger

3. Summer in the City

Liberty National is in Jersey City, N.J., across the Hudson River from Lower Manhattan. Tournament people of every stripe are staying in the different Jersey City hotels, enjoying the views. The Statue of Liberty to the south. The New York City skyline to the east. Weather systems moving in and moving out along the river. And crisscrossing the river, in good weather and bad, a passenger ferry named for an icon on both sides of the river, Yogi Berra, the iconic New York Yankees catcher and beloved member of the Montclair Country Club in West Orange, N.J. Once, not at Montclair, a course super fishing for a compliment asked Yogi what he thought of his fairways. Said Yogi, “They’re too narrow.” Drinks of various kinds have always found celebrity endorsers: George Clooney and Casamigos Tequila, Arnold Palmer and Arizona Iced Tea, Tiger Woods and Monster Energy drink. But there will never be an endorsement more powerful than Yogi and Yoo-hoo, with Yogi’s mugshot right on the bottle. At the Rolling Green Golf Club outside of Philadelphia, Yoo-hoo and root beer is an at-the-turn treat for some discerning golfers. You drink that out of a cup. For this reporter, Yoo-hoo out of the bottle was his go-to halfway house choice in his misspent Long Island youth (Bellport Golf Club), Yogi’s crooked smile right on the label, no matter how many balls you had already lost.

A spectator at Liberty National took a page from Jack Nicholson’s character in Five Easy Pieces, who gets his off-menu toast order, despite the diner’s rules, but ordering a chicken sandwich, without the chicken. A guy at Liberty National wanted to buy a glass of orange juice at a concession. The young man said the orange juice was for their mimosas. The guy ordered a mimosa without the bubbly or the triple sec. Just the orange juice. Everybody left happy.

Ernie Els was at Liberty National on Tuesday, meeting with players who will be and are likely to be on his Presidents Cup team in December. He is the captain of the International team. Tiger is the captain of the American team. The first practice round for the event, being held at Royal Melbourne in Melbourne, Australia, is on Monday, Dec. 9, and the four-day event begins on Thursday. The Hero World Challenge, the 18-player Bahamian event which Woods plays in and hosts, concludes this year on Saturday, Dec. 7. Afterward, he and various caddies and players on his team will take a charter plane to Melbourne. There could easily be six or more U.S. players in the Hero field and on that plane. For now, one International player is expected to be in the Hero field, if that. That might matter. The course they play in the Bahamas, coincidentally, was designed by Ernie Els. Royal Melbourne was designed by Alister MacKenzie, the co-designer of Augusta National. There are broad similarities between the two. So Tiger’s got that going for him, which is nice.