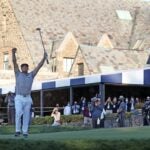 Bryson DeChambeau's victory was about as dominant as they come.

Bryson DeChambeau obliterated the field at the 2020 U.S. Open at Winged Foot, and the stats back it up. Here are six takeaways that explain DeChambeau’s dominance this week.

Greatest final round in nearly 50 years

DeChambeau was the only player in the field to shoot under par on Sunday. The course played harder than it has all week, and somehow DeChambeau never broke. His final-round 67 was 7.9 strokes better than the field average on Sunday, which was the fourth-best U.S. Open final-round performance ever, and best since Johnny Miller’s 63 at Oakmont in 1973.

Everyone remembers Tiger Woods’ epic 15-stroke victory at the 2000 U.S. Open. Well, the only Open that has seen a bigger differential than DeChambeau’s six since then was Martin Kaymer’s impressive performance at Pinehurst No. 2 in 2014. Runaway victories like these — and DeChambeau’s — tend to only feel more impressive the more time passes by.

Irons and chipping were phenomenal, especially for him

DeChambeau bombs it and putts well — we all know that. But what is lost in his game, especially this year, is that his irons and wedges haven’t been good. DeChambeau was below average in strokes gained: approach and around the green during the 2020 season, but not this week.

Bryson gained more than a stroke on the field in both aspects during the event. Not only that, he was statistically more efficient with his irons and wedges than he was with his driver and putter.

We began the week hearing all about how a U.S. Open at Winged Foot should be one of the toughest tests you can arrange in golf. And how the winner, surely, would not be under par. So much for that talk.

DeChambeau not only shot under par, but he beat or matched par in every single round he played this week. There was never a stretch where he lost the plot, and it showed in the 68-69-70-67 string of rounds he put together.

It was really an exercise in consistency all week long. DeChambeau’s worst 9-hole score on the front or back each day was 36. Not a single player in the field can claim that, or something close to it. He never torched a single nine; he just played steady golf and made birdie wherever he could. Oh, and eagle too. He led the field with those two eagles he made on the par-5 9th.

Part of the reason why he was able to avoid blowing up on any 9-hole stretch was the fact that DeChambeau made zero double bogeys. Where just about everyone in the field made a double at some point, DeChambeau never did. Not once. Steely golf.