The 6 best U.S. Open groupings for the first two rounds at Winged Foot 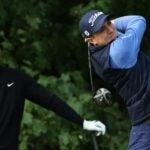 Tiger Woods and Justin Thomas make up 2/3rds of a stellar grouping during the first two rounds.

Tee times are out for the U.S. Open at Winged Foot, making the wait for Thursday morning feel even longer than previously imagined. But thankfully, once the action gets underway, we’ll have plenty of groups to follow.

Here’s a ranking of the best groupings and their corresponding tee times during the first two rounds.

Irons, irons, irons. Plain and simple, these are three of the greatest iron players alive. Tiger is the greatest ball-striker to ever play. Morikawa is absolutely following in Tiger’s footsteps on that front. And Thomas, well, he was the No. 1 iron player during the 2019-20 PGA Tour season. So eat your heart out as these guys try and pick apart a tough course with precision.

Follow this group closely and you might see the round of the tournament. All three players launch the ball as far as anyone in the game, so if their drivers are on, you could see them shoot 67 simply by getting a bunch of wedge shots into these tricky Winged Foot greens. Will that happen multiple times? Probably not. But if anyone is going to make Winged Foot look easy, it’s probably a bomber.

This might be the group of “Can They Win Another One Soon?” Seriously, McIlroy, Scott and Rose have all had their chances at majors in recent years but haven’t come through with wins. Baring McIlroy, it feels like the other two should definitely have more major wins than they currently hold. All three are proper golfers who can grind out a sporty 66 if they play their best this week. But will they putt it well enough to hang around?

The All-Arizona State Sun Devils squad is an interesting one for multiple reasons. Of course, Mickelson’s chase for the career grand slam is a fun storyline, even if it feels unrealistic in scope. We must pay attention, though. Then there’s Rahm, who has performed at his best when the courses were toughest this season, winning at the Memorial and the BMW Championship. Lest we forget that Casey was runner-up at Harding Park just last month.

This grouping has way more pop than anyone will give it credit for. For starters, Champ nearly won the PGA Championship a month ago at Harding Park and he’s rounding into much more consistent form. Im is becoming one of the most beloved foreign players, and he’s shown his game travels everywhere — even to a place like Winged Foot. And lastly, Niemann has quietly risen to No. 49 in the world. Could one of them make a splash?

This one we just have to pay attention to. Patrick Reed has actually fared really well in U.S. Opens in his career. He almost ran away and stole Shinnecock from everyone in 2018. Is his game on point? Is Jordan Spieth alive? Of course he’s alive, but is his game alive? Spieth’s struggles feel like they could be magnified at the Foot. And then there’s Hideki, quietly waiting. The No. 18 player in the world has missed two cuts this summer, but every other performance has been a top-30 finish. He’s playing very consistent golf. Will his putter be his friend this week?