It’s inching ever closer. Tiger Woods vs. Phil Mickelson, a showdown also known as “The Match.” And now, we have some new details about it.

There’s a lot of ill will around all this which, frankly, I find surprising. The whole thing is a bit of a cash grab, but who cares? It’s going to be fun and weird and different. Whether or not it becomes a routine thing, I’ll be tuning in this time just to check out the novelty of it all.

The pay-per-view price for the match will come in at $19.99, as was announced yesterday. That price point left some golfers outraged at the idea of paying nearly $20 to watch a one-on-one match, but speaking during TNT’s NBA broadcast on Thursday night, Phil explained that fans won’t only be paying to watch 18 holes. The players will be mic-ed up so there’ll be plenty of trash talking, he said, and there’ll be a fair amount of side bets:

“We’re going to have little challenges that can maybe get in each other’s heads. You have a downhill putt? I’ll bet you 50Gs that you miss it.”

Betting 50 grand on a putt? @PhilMickelson is talking big money 🤑

"The Match" is less than a month away 👀. Watch exclusively on @brlive Friday, November 23 pic.twitter.com/QlrU0xa8ST

Even the announcers love it, and can you blame them? It will be hilarious watching Phil Mickelson throw down $50,000 in front of Tiger Woods as he stands over a tricky putt. The pressure will be on. Who doesn’t want to see that? 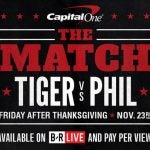