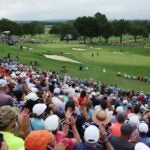 Tiger Woods will continue to be a huge draw over the weekend at Southern Hills.

Here’s what you can look forward to during Saturday’s Round 3 at Southern Hills.

Yes, that’s right. Incredibly, after firing a first-round 74, Woods bounced back with a second round of 69 on Friday to make the cut with a shot to spare.

While we know Woods only tees it up when he believes he has a chance to win, watching him simply make the cut at the last two major championships has been incredibly satisfying.

Will Zalatoris has proven himself to be a major player for the last two years, with an impressive four top 8s since the 2020 U.S. Open.

Now, he’s leading the charge at the PGA Championship — nine under par, and three shots between him and the first proven major winner of his chasers, Justin Thomas.

Is it finally the 25-year-old’s time? We can’t wait to find out.

Who is Mito Pereira, you ask? Another young stud with some serious game, currently one shot behind Zalatoris’ lead.

With zero Tour wins, and therefore zero expectations, the 27-year-old Chilean may have just the right amount of freedom and under-the-radar mojo to become the first true surprise major winner in a long while.

Rory McIlroy and Bubba Watson haven’t won a major since 2014. For Thomas, it’s been since 2017. All three players are within five shots of Zalatoris’ lead.

Will any of these players achieve a major redemption in the next 48 hours? Time will tell!

Friday brought some brutal conditions to Southern Hills, with 40 mph gusts wreaking havoc on both the players and course setup. What will Saturday bring?

According to Weather.com, Saturday will be warm, with the temperature peaking at 90 degrees by 3 p.m. The wind is expected to be way down compared to Friday, though, with breezes not exceeding 15 mph throughout the afternoon.

Ready for a great day of golf? Check out the Round 3 tee times here.