Phil? Tiger? The next big thing? 4 unanswered questions for the 2023 Ryder Cup in Rome 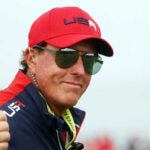 No one has played in more Ryder Cups than Phil Mickelson, who was a vice-captain at Whistling Straits.

With the most lopsided final tally in the modern history of the event, this year’s Ryder Cup ended in decisive fashion. But it also raised a series of questions about the future make-up and prospects of both teams. Here are four we’re pondering as we look toward Rome in 2023.

Will the next Europeans please stand up?

While the Americans were longer off the tee this year, the Europeans were longer in the tooth, with four players in their 40s on a 12-man roster (Sergio Garcia, Ian Poulter, Paul Casey and Lee Westwood) pitted against a dozen guys whose ages averaged under 30. Aside from Garcia, the Gen X-ers did not fare well. At 48, Westwood has likely played in his last Ryder Cup. If Casey, 44, and Poulter, 45, want another crack at the competition, they’re almost surely going to have to auto-qualify for the team, something Poulter hasn’t done since 2010. There’s a fine line between experienced and over-the-hill.

It’s not that Europe doesn’t have fresh faces. Viktor Hovland and Jon Rahm are 24 and 26, respectively, while Rory McIlroy, 32, has plenty of battery-life left. But the team is in dire need of a youth infusion to replace its aging core. Who will provide it? Robert McIntyre of Scotland? Italy’s Guido Migliozzi? The search is on for Europe’s Generation Next.

Professional golf is not as ageist as some other sectors of the entertainment business; it allows its graybeards to mature into new roles. At 51, Phil Mickelson has begun that transition. With 12 Ryder Cup appearances under his belt, he was skipped over this year as a captain’s pick and appointed to the post of assistant captain, a position he appeared to relish. It’s just a matter of time before he gets the next promotion. Will 2023 be the year that we start calling him Captain Phil? Or maybe someone like, say, Zach Johnson, is up? We’ll have to wait and see.

A Tiger near the Coliseum?

Since his devastating car wreck last February, Tiger Woods has been the golf world’s Garbo: much discussed, rarely seen. The lack of public sightings has only added kindling to the constant burn of questions surrounding Woods. When, if ever, will he return to competition? What semblance of his game will he be able to reclaim? If the answers are 1) soon and 2) quite a bit, other queries will arise. Already, we can’t help but ask: is there any chance that Tiger might peg it in Rome? See limited action as a playing captain? Serve as a deputy for someone else? Perhaps Tiger’s future is the biggest question mark of all.

Is the U.S. on the verge of a dominant run?

In golf, the past isn’t always prologue. Anyone who knows the game understands that it is far too fickle for reliable predictions. But fact-based musings are another thing. Over the history of the Ryder Cup, dominance has come in cycles. In the first 25 installments of the event, the United States won 21 times (and tied two others). But then the script flipped, and in that role reversal, between 1995 and 2018, the Americans were beaten in nine out of 11 tries. That turnabout was triggered by a major change — the inclusion of players from continental Europe on the opposing team previously restricted to golfers from Great Britain and Ireland. The Americans, of course, won’t be adding stars from other countries. But it has been adding talent, as a generation raised on Tiger Woods has entered its prime. The impact was plain to see at Whistling Straits, and while, yes, sure, nothing’s guaranteed, the strength and depth and youth of the U.S. roster should be present in Rome, and beyond.