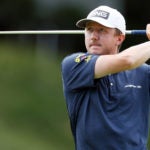 Mackenzie Hughes hits his tee shot on the 18th hole at TPC River Highlands on Thursday.

A flirtation with 59. A flock close behind. Phil. Here are three things you should know after Thursday’s first round of the Travelers Championship at TPC River Highlands in Cromwell, Conn.

“I kind of joked walking off there that 59 wasn’t even the record because Jim’s 58. I mean, it’s probably not even that special around here,” Hughes said of shooting 59. “But for a personal milestone, it would have been really, really neat. You just don’t get very many chances in your life to do it.”

As the third tournament after the PGA Tour’s three-month hiatus due to the coronavirus, the Travelers attracted many of the world’s best, and many were among the top of the leaderboard.

Three shots behind Hughes were world No. 1 Rory McIlroy, Xander Schauffele and Viktor Hovland. Six golfers were four shots behind, including Phil Mickelson and Sergio Garcia, and Bryson DeChambeau was among the six golfers five shots back.

Mickelson played with McIlroy and DeChambeau, and the pairing was a combined 18-under.

“I love trying to play and compete, and I really enjoy playing with guys like Rory and Bryson, who are just tremendous talents and trying to compete with those guys,” Mickelson said. “Rory has got one of the most beautiful golf swings this game has ever seen, and Bryson has got a unique style of playing that is fascinating, and he plays at the highest level. I enjoy kind of watching and learning, but I also enjoy trying to play my game and compete regardless of age.”

Masters tickets: What you need to know now that fans won't be allowed in 2020