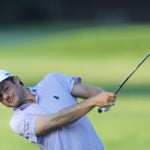 Doc Redman hits a shot on the 11th hole at Detroit Golf Club.

Bryson DeChambeau is hitting the ball farther than nearly every player on the PGA Tour this season. On Thursday, he scored nearly better than every player. Here are three things you should know after the first round of the Rocket Mortgage Classic at Detroit Golf Club in Detroit.

All three leaders played better on their second nine.

Redman bogeyed the 10th hole before making birdies on the 11th, 12th, 13th, 15th, 16th, 17th and 18th holes; Kisner had no bogeys and seven birdies, including five on his second nine; and Stallings had eight birdies, but a bogey on the 2nd cost him a chance at the outright lead.

Bryson DeChambeau among those a shot behind

Bryson DeChambeau was among those a shot behind the leaders.

He had that shot entering the 18th hole, before hitting his approach over the green and failing to get up and down. Before that, he played the back nine at 6-under.

A whopping 21 players were three shots back.

Chris Kirk missed six months of play last year after announcing last May he was taking a leave of absence from the game to get a handle on his alcoholism and depression.

Kirk’s comeback appears to be complete.

Two weeks ago, he won the Korn Ferry Tour’s King & Bear Classic, his first victory since 2015. Thursday, he was near the top of the leaderboard on the PGA Tour.

Kirk shot a 5-under 67 and is two strokes behind Doc Redman, Kevin Kisner and Scott Stallings. Teeing off first on the 10th hole, Kirk started with a bogey, then eagled the 14th and birdied the 15th, 17th, 3rd, 4th and 5th before bogeying the 6th.

“Yeah, it just gave me a little bit more belief,” Kirk said of his Korn Ferry Tour victory. “I think that before that, I knew that I was playing well, but obviously wasn’t seeing much in the way of results. But was happy with my golf swing and felt like I was working on the right things with my putting, but nothing can replace the confidence you get from shooting some low numbers and playing well when it counts.”