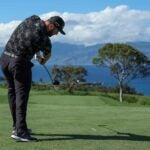 Jon Rahm is three shots back at the Tournament of Champions halfway point.

The third round of the 2022 Sentry Tournament of Champions gets underway Saturday, January 8, at Kapalua in Hawaii. You can find full Round 3 tee times for the tournament at the bottom of this post.

Featured pairing for Tournament of Champions Round 3

The week’s Most Interesting Man, Jon Rahm, has certainly impressed in his 2022 debut — the first tournament he’s played since missing the cut at the Fortinet Championship in September last year.

Anyone who was wondering whether the reigning World No. 1 had lost any of his top-of-the-game form now has a pretty definitive answer. Back-to-back rounds of 66 have him tied for second with Daniel Berger at 14 under par. Both young players trail Aussie Cameron Smith, whose second round of nine-under 64 opened up a three-shot lead.

Smith and Rahm will go head-to-head on Saturday afternoon in the third round’s final pairing at 5:55 p.m. ET, and it’s sure to be a good show.

Check out complete third-round tee times for the 2022 Sentry Tournament of Champions below.

2022 Tournament of Champions Round 3 tee times (All times ET)