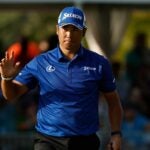 Hideki Matsuyama launched himself into contention Saturday at the Sony Open.

We’ve reached the final round of play at the 2022 Sony Open at Wai’alae Country Club in Honolulu, Hawaii. Below, find everything you need to know to tune into the action on Sunday, including streaming information, television schedule, and tee times.

It’s been an eventful week in the world of pro golf — on Twitter and otherwise — but on Sunday morning, the stage is set for yet another dramatic finish at the Sony Open. Russell Henley leads after 54 holes of play, his 3 under, Saturday 67 paving the way for a two-stroke lead heading into Sunday’s final round. Henley’s opening round scores of 62 and 63, respectively, cleared the path for a drama-free Saturday, but they likely won’t be enough to keep the heat off him heading into Sunday.

Trailing closely behind Henley is a group of stars headlined by reigning Masters champ Hideki Matsuyama. Matsuyama (-16) trails by two heading into Sunday after a third-round 63 vaulted him up the leaderboard ahead of names like Matt Kuchar, Haotong Li and Seamus Power (all T3 at -14). A come-from-behind win on Sunday would be Matsuyama’s third victory in the last 12 months.

Further back, a pair of Kevins look for vengeance on Sunday. Kevin Kisner (-13) looks to respond to his Ryder Cup snub with his first win in 2022, while Kevin Na looks to avow himself of the Twitter trolls en route to a victory of his own. Below, find everything you need to know to watch on Sunday, including streaming and television schedules, as well as tee times.

How to watch Sony Open Round 4 on TV

You can watch the final round of the 2022 Sony Open on Golf Channel, with coverage running on the network from 6-10 p.m. ET Sunday.

How to stream Sony Open Round 4 online

You can stream Round 4 of the 2022 Sony Open in Hawaii via PGA Tour Live on ESPN+ on Sunday from 12:45-10 p.m. ET, which includes featured group coverage. Fans can also stream the second round Golf Channel telecast on golfchannel.com.

How to bet on the Sony Open